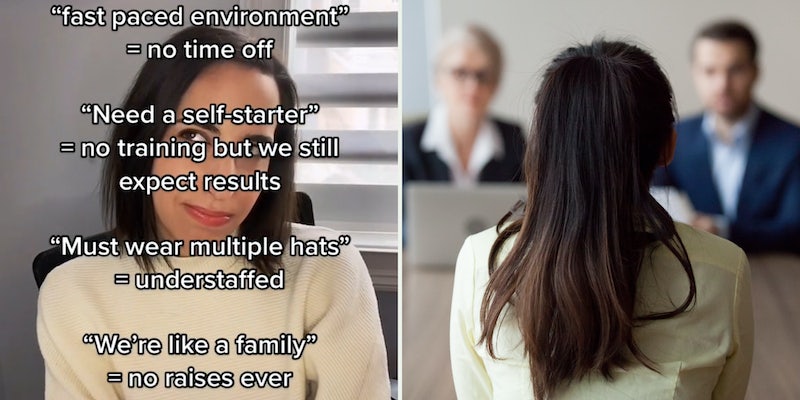 ‘We’re like a family = no raises ever’: TikToker says these are common code phrases toxic workplaces use

'Why is this on every job description though.'

A TikToker broke down some common phrases allegedly used by job interviewers and toxic workplaces, and viewers think she’s onto something.

The TikToker, Ashley Feinstein Gerstley (@thefiscalfemme), has about 1,200 followers on the platform and posts about finances and “helping women get wealthy.” Gerstley also authored the book Financial Adulting: Everything You Need to be a Financially Confident and Conscious Adult.

In her video, Gerstley listed out a handful of “toxic workplace phrases” alongside what she thinks they really mean. For example, if a job interviewer uses the term “fast-paced environment,” it means a worker won’t get any time off from the job.

The term “need a self starter,” she argues, just means that a worker won’t get any training but will still be expected to produce results. If they say “must wear multiple hats,” that means a workplace is understaffed, she adds.

Finally, the phrase “we’re like a family” indicates that a worker will get no raises ever at that job, Gerstley says.

The TikTok video garnered 1.4 million views as of Tuesday, and viewers chimed in in the comments section with their own additions.

A third said, “Flexible scheduling: we’ll schedule you whenever we damn well please.”

“Competitive Wages= 0.25 Cents more then the place down the street,” a fourth viewer commented.

Multiple viewers had their own explanation for the term “we’re like a family” specifically.

“We’re like a family = one you can’t call cps on,” one TikTok user wrote.

“Biggest red flag ‘we are family here,'” another user said.

Someone else commented, “We’re like a family means you’ll be paid less and asked to work for free.”

“We are a family here= we will break every workers law and you’re not allowed to tell anyone,” another user wrote.

One viewer said that if you even see the word “family” on a job application, you should run in the other direction.

Despite the phrases being commonly recognized as toxic or manipulative, some viewers claimed that they’re used on most if not all job descriptions.

“Why is this on every job description though,” one viewer claimed with a laughing emoji.

Another viewer wrote, “I don’t remember seeing a job ad without at least one of these tho.”

The Daily Dot reached out to Gerstley via TikTok comment.