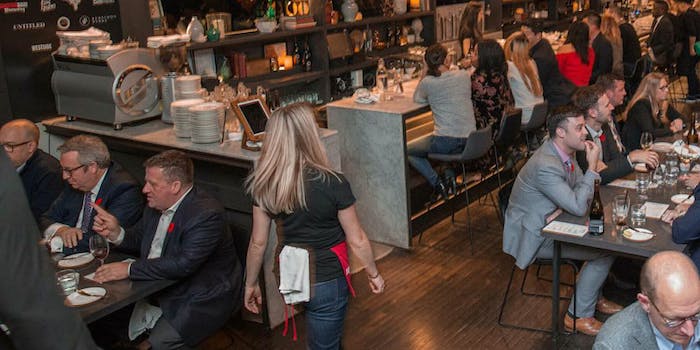 Let's end the HIV myths with a delicious, risk-free pappardelle.

“We really wanted to be able to challenge the stigma that still exists around HIV,” Casey House’s Joanne Simons told the Guardian. “I think that there’s still this lingering notion that if I have regular human contact with somebody with HIV, I may contract it—and it is still a death sentence.”

Took a page out of @TheEllenShow’s book and danced the doors closed on the worlds FIRST ever HIV+ Eatery. Congratulations to our team of HIV+ chefs and @fidelgastros on 3 successful, sold out dinner services. #SmashStigma pic.twitter.com/wM8TVZwfT1

These days, HIV medications are advanced enough to both prevent HIV infections as well as mitigate the disease’s symptoms. Not just that, but basic kitchen sanitary practices prevent any possible infection in the first place. If an injury happens in the kitchen, affected areas are sanitized and food exposed to human blood is thrown out. Not to mention, HIV just doesn’t survive long outside the human bloodstream.

“There’s absolutely no risk that somebody can contract HIV from sharing a meal,” Simons explained to the Guardian. “HIV doesn’t live well out of the body for any length of time and through the cooking the virus dies.”

It’s the final night of June’s HIV+ Eatery and we couldn’t be more excited to welcome our final guests. #SmashStigma pic.twitter.com/ckyfNdh7r5

But even though HIV infections aren’t as simple as the public believes, many of the HIV-positive workers involved with June’s have faced harsh judgement throughout their lives over their status. One cook, Muluba Habanyama, remembers being forced to eat her meals with paper plates by a mentor when she was 7 years old. She also lost her parents to the disease, causing Habanyama to lie about her mother’s death to prevent any further stigma against her immediate family.

“Me and my sister had to plan [my mother’s] funeral,” she told the Guardian. “And people would come and ask what happened. And we would make up stories. So I didn’t really get to grieve properly because I was making up lies and stories and couldn’t really tell my friends and extended family what really was going on.”

With HIV rarely making headlines anymore, it’s more important than ever to fight the myths targeting HIV-positive people. And the good news is Toronto residents have heeded the call. People reports June’s HIV+ Eatery sold out on both Nov. 7 and 8 when it opened—and tickets cost $125 for a four-course meal.

“We’re delighted with the reception the pop-up received & with the global conversation it generated,” Casey House wrote on Twitter. “Keep talking & help #smashstigma.”