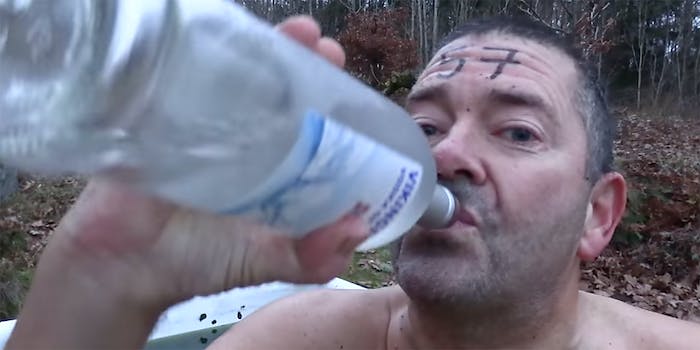 ‘Gives me goosebumps’: YouTuber dies 5 days after posting video saying he was ‘not dead’

Popular Norwegian YouTuber Tor Eckhoff on Monday uploaded a video for his birthday with the teasing title, “I am Not Dead, I am 57 today.” Five days later, Eckhoff died while filming another video, according to Norwegian newspaper Verdens Gang.

Eckhoff, known on YouTube as Apetor, reportedly fell through the ice at Jakobs Dam in Kongsberg, Norway. Though he was alone, an eye witness reportedly called for authorities who pulled him from the water.

Eckhoff was known for his videos capturing wild stunts in the Scandinavian winter. In 2016, he spoke with the Daily Dot about how he would chug vodka, skate on thin ice, and take Polar Bear swims.

“When you are ice swimming or messing around almost naked in the snow, you have a limited amount of time before you get too cold. During that time you just have to handle the cold mentally,” he told the Daily Dot at the time.

Eckhoff, who had 1.2 million YouTube subscribers, made it a birthday tradition to caption videos “I am Not Dead.” Many fans commented on the tragic irony of the caption of his last video, which had over 1 million views.

Tributes also poured in on Twitter on Sunday. “He died doing what he loved, producing his wacky and nonsensical videos that never fail to put a smile on one’s face,” wrote NymN, a YouTuber and Twitch streamer. “Gone but never forgotten!”