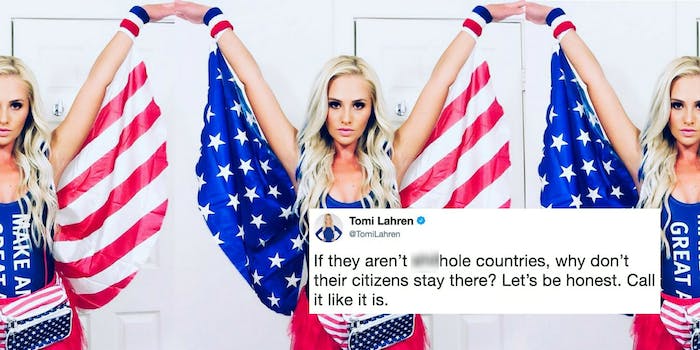 Someone needs to school Tomi Lahren on the U.S. history of 'sh*thole' practices and policies.

In the early hours of Friday morning, much like her favorite MAGA man himself, Lahren shared several tweets endorsing Trump’s stance that the U.S. keeps accepting immigrants from “shithole” nations, which he reportedly said during an immigration reform meeting with senators in the Oval Office on Thursday.

More specifically, Trump asked, “Why are we having all these people from shithole countries come here?” He then suggested the U.S. bring in people from countries such as Norway. Well-to-do, white Norway.

The comment, understandably, ruptured through newsrooms and political hubs internationally, with the sentiment being that Trump’s language exposed his dismissively racist ideology of other countries.

“If they aren’t shithole countries, why don’t their citizens stay there? Let’s be honest. Call it like it is,” Lahren tweeted.

“All these leftist pearl clutchers are so upset President Trump referred to some ‘shithole’ countries while they’ve spent the last 2 years+ telling us the USA is a shithole country not worth standing for. Please. Get over yourselves,” Lahren continued in a second tweet.

If they aren’t shithole countries, why don’t their citizens stay there? Let’s be honest. Call it like it is.

All these leftist pearl clutchers are so upset President Trump referred to some “shithole” countries while they’ve spent the last 2 years+ telling us the USA is a shithole country not worth standing for. Please. Get over yourselves.

Later, Trump said although he used “tough” language, he didn’t say the word in question.

Unsurprisingly, Lahren got “ratio-ed” to hell and back for doubling down on Trump’s “shithole” assertion, pulling in just more than 5,000 retweets but more than 9,000 replies.

“I expect my President to have some level of decorum and respect. Under his leadership (and I use that term loosely) we have been delegated to a classless nation. But for his 39 percent base, this is as classy as it gets,” one commenter responded.

Would it make more sense if I compared it to the ways we might be comfortable pointing out our own flaws, but we would never do that to a friend, or a stranger nonetheless? Except, in this case, pointing to the U.S. flaws’ isn’t a symptom of us Americans just being really hard on ourselves, but is, in fact, a reality so many Americans, Lahren included, need to face.

But I get it—Lahren just really loves the U.S., and is just so head-over-heels overwhelmed by her love that she fails to comprehend how terrible this nation has truly been, and continues to be.

She doesn’t think the U.S. is a shithole, despite its centuries-long institution of slavery and the continued discrimination and disproportionate imprisonment of Black Americans. Its abuse, murder, displacement, and continued exploitation of Native Americans. Its use of concentration camps on Japanese immigrants and citizens, and its continued use of these methods to detain undocumented immigrants.

No, she doesn’t think the U.S. is a shithole even though tens of thousands of white, working class people—the people she roots for and cheerleads in her angry, ranting videos—are currently facing an opioid epidemic with overall very few resources for treatment.

She doesn’t think the U.S. is a shithole even taking into account it’s well-kept secret of creating two sterilization policies that Nazi Germany—specifically Adolf Hitler himself—then adopted nearly word-for-word from the U.S. in the 1930s, which he then used to experiment on and sterilize 400,000 people in the Holocaust.

You know, those same eugenics policies that led to our own country’s creation and enforcement of compulsory sterilization laws which justified the sterilization of 350,000 men and women (often people of color and people with physical or mental disabilities) without their consent by 1945. The same laws that continued to be legal and practicable in certain states through the 1970s. Nope, the U.S. isn’t a shithole for that, despite its reluctance to apologize and pay reparations to the remaining living victims of its abuse.

And Lahren certainly doesn’t think the U.S. is a shithole for, as journalist Jonathan M. Katz (who previously lived in Haiti and reported on the country for years before and after the 2010 earthquake) has pointed out on Twitter, our country’s tremendous role in the exploitation and resulting poverty of Haiti that has made it a so-called “shithole” in the eyes of Lahren and the president in the first place.

The U.S. is so far from being a shithole country to Lahren, injustice and all! Nope, no way. Those other countries are shitholes. You know, the ones Trump talked about in that meeting. But not Norway. And definitely not the U.S., you unpatriotic libs.

Have fun walking your racist comment back now that the president has tried to himself, Lahren.