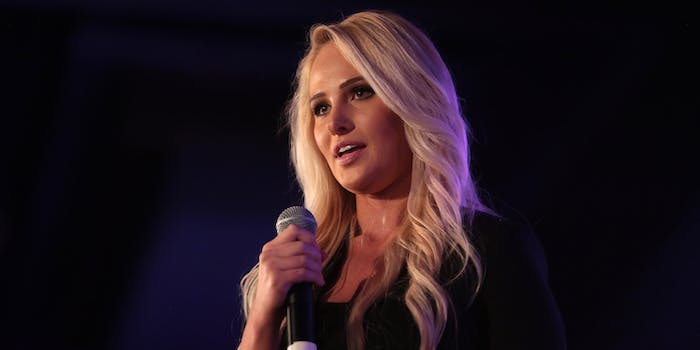 She's since deleted the bad take.

Tomi Lahren is no stranger to bad takes, but the political commentator recently outdid herself in a now-deleted tweet comparing social distancing rules to “willful slavery.”

“Compliance starting to look a whole lot like willful slavery. #ReopenAmerica,” Lahren tweeted on Monday as part of a series of tweets addressing her thoughts on stay-at-home orders and social distancing protocol.

The Fox Nation host objected to shelter-in-place orders instituted to mitigate the spread of coronavirus, and she supported anti-lockdown protests that drew thousands in states such as Michigan, Ohio, and Texas.

“The point was to flatten the curve, not eradicate the virus. It may take a year or more to kill the virus but the economy and livelihoods of millions are about to be destroyed entirely. Enough,” Lahren tweeted. “The supply chains are weakening, Americans are losing everything & elected officials are giving vague answers as to when it will end.”

But it was Lahren’s “willful slavery” tweet that drew the swift ire of other Twitter users—and not just the liberal ones.

Chart-topping singer and songwriter Richard Marx even got in on the action, advising Lahren to “go ride the subway, shop at a mall, and hold the escalator handrail, and hug random ‘fans’ with no mask on video or shut your ignorant mouth.”

Twitter user Mike Sarzo cut to the heart of the matter with his astute observation that, um, slavery is not and has never been willful, and staying at home for a few weeks in order to not die seems pretty light by comparison.

Lahren was apparently able to gauge the temperature of the reaction to her tweet, as it is nowhere to be found on her account. As of yesterday, she was busy advocating on Twitter for President Donald Trump to “sign mandatory country of origin labeling back into law” so Americans can all sleep soundly knowing their beef comes from U.S. cows.