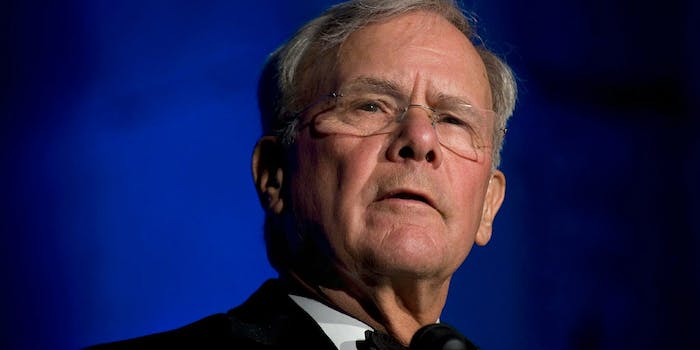 Tom Brokaw has denied all allegations.

Former NBC News correspondent Linda Vester and an anonymous former production assistant have told the Washington Post that anchor Tom Brokaw made unwanted sexual advances and acted inappropriately with them in the 1990s. Neither women reported the incidents at the time.

According to the Post report, Vester, 30 years Brokaw’s junior, said the anchor invited himself to her hotel room in 1994 despite her attempts to convince him not to. Once inside the room, Vester said Brokaw beckoned her to the sofa and touched her without her consent. He “pressed his index finger to my lips and said, ‘This is our compact,'” according to Vester’s diary entry from the time.

He then allegedly put his hand behind her neck, gripped her head, and stated, “Now let me show you how to give a real kiss,” before jerking her head toward his. She said she tensed up, got free of his grip, and told him, “‘Tom…I don’t want to do that with you.'” The Post corroborated Vester’s statements with her diary from the time, as well as with a fellow former NBC coworker of Vester’s who she confided in that night.

The second account of sexual misconduct against Brokaw comes from an anonymous former production assistant, who was 24 at the time. She said that once in a hallway in the mid-1990s, Brokaw approached her in a small enclave, commented that her hands were cold, then put her hands under his jacket against him and pulled her in close. He asked her how her job search was going, she said, and then asked her to come to his office for coffee later to talk about it.

She told the Post that “the implication of his invitation” was clear. She never went to his office and left her job shortly after the encounter.

In November, NBC fired Today show host Matt Lauer for “inappropriate sexual behavior in the workplace.” The network took a number of missteps in handling the Lauer accusations, according to the Post. Former Today co-host Ann Curry said in 2012, the year she was let go, she warned management about an employee who told her that Lauer sexually harassed her; NBC said it has no such record.

Vester told the Post she does not intend to sue Brokaw or NBC. Brokaw has denied the behavior described by Vester and said the incident described by the anonymous former production assistant never happened.

“I met with Linda Vester on two occasions, both at her request, 23 years ago, because she wanted advice with respect to her career at NBC,” Brokaw responded in a statement from NBC. “The meetings were brief, cordial and appropriate, and despite Linda’s allegations, I made no romantic overtures towards her, at that time or any other.”

Update 7:26am CT, April 28: Dozens of female journalists—including MSNBC star Rachel Maddow, Andrea Mitchell, and Maria Shriver—have signed a letter of support for Brokaw, saying he “has treated each of us with fairness and respect” and calling him “a man of tremendous decency and integrity.”

Here, via the Hollywood Reporter, is the entire text of the letter, which was signed by 64 women and released Friday.

As professional women, we fully endorse the conversation around abuse of power in the workplace. In the context of that conversation, we would like to share our perspectives on working with Tom Brokaw.

We are current and former colleagues of Tom’s, who have worked with him over a period spanning four decades. We are producers, correspondents, anchors, directors, executives, researchers, personal assistants, editors, and technical staff.

Tom has treated each of us with fairness and respect. He has given each of us opportunities for advancement and championed our successes throughout our careers. As we have advanced across industries—news, publishing, law, business and government—Tom has been a valued source of counsel and support. We know him to be a man of tremendous decency and integrity.