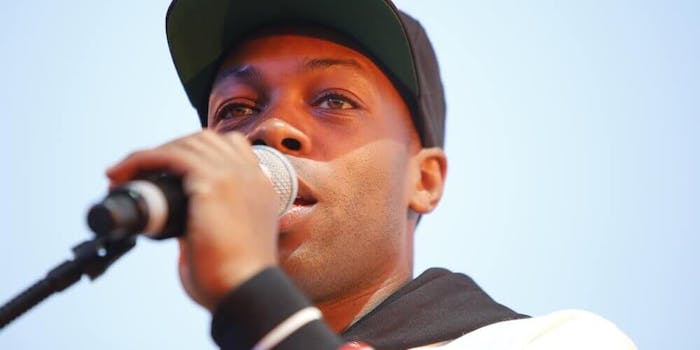 He went on a tweetstorm and showed receipts.

Todrick Hall’s former assistant Thomas McKissock (@tommy_italiano) is calling the former American Idol singer out on Twitter for being allegedly abusive, using his money on escorts and strippers instead of paying creatives, and even talking smack about his previous colleague, Taylor Swift. And now others who have worked with Hall are coming out of the woodworks to back some of his claims.

“I was @Todrick Hall’s personal assistant for years and I know every detail of his life including deliberate non-payment to people, racism, sexual assault, sexual harassment, online bullying, exploitation, illegal business practices…. the list goes on. P.S. I NEVER SIGNED NDA,” McKissock wrote on Twitter over the weekend, the first of a slew of messages making allegations against Hall.

“Who wants to see the full video of @todrick BASHING @taylorswift13?!@TamarBraxtonHer sits in disbelief but does not to comment. Todrick TRIED to bury the video. Also … Todrick told me that Taylor Swift wore @KimKardashian’s stolen [ring] during LAWYMD video in bathtub,” McKissock wrote.

Among the long list of accusations, McKissock claims Hall defrauded RuPaul’s Drag Race and also has also had to go to court over sexual assault allegations.

“Does @RuPaul and @RuPaulsDragRace know that @Todrick LIED to producers and committed fraud to have one his dancers he was dating to be on the show? You see- Danny Williams is from England and unable to work in the USA so Todrick used a PA named Danny to send the check to,” the former assistant wrote, tagging RuPaul and his team in the tweet.

In a lengthy letter posted to Twitter by McKissock, Hall’s former Straight Outta Oz tour manager Stephen M. Land blasted the singer. He said that Hall fired him and his boyfriend for having a relationship with one another instead of continuing their individual sexual liaisons with the singer.

“Receipts below. Former Tour Manager emailed this to the cast following his exit from tour which lead to a full sexual harassment lawsuit that @todrick SETTLED out of guilt. I have first hand knowledge,” McKissock wrote.

Land claimed the unfair firing left them both financially hindered and homeless. He also says his boyfriend has been battling diabetes-related illnesses and cannot afford his medication.

“Please guard yourself because Todrick Hall is far from the man you see on YouTube,” Land wrote to the other members of the Oz cast still working with Hall. “He is Heartless like the Tin man, a Coward like the Kion and has shown himself to be the Wizard; a cruel, careless, insensitive human being.”

McKissock also claims Hall has a history of stealing, even from his fans.

“@Todrick has a history of stealing from fans. Scooter’s business partner called him out recently and she’s not the only one! Todrick started ‘Moth Candy’ and defrauded fans of thousands of dollars by never sending the merchandise. I feel bad for them and I’ve attempted to help,” he said.

In light of all of these allegations, some who have worked with the “Nails, Hair, Hips, Heels” singer have also come out with their own stories of mistreatment.

“A bunch of folks have asked about my experience working with Todrick,” @thomeography, a former dancer for the star, wrote. “I know it’s no surprise but just gonna tell u all now… yes… Your reservations about the fella are valid.”

A bunch of folks have asked about my experience working with Todrick… & I know it's no surprise but just gonna tell u all now… yes… Your reservations about the fella are valid pic.twitter.com/qcBSGsXQqr

@thomeography went on to claim Hall never pays and expressed racist sentiments on the set of his music video.

Ive done 2 videos for him now.. The 1st one (Nails, Hair Hips Heels) was unpaid because he needed over 60+ dancers & says he didn't have the budget to pay us (then don't use dancers, tf!)

Hall has been hesitant to respond to the many allegations on social media but did choose to address McKissock’s initial tweets in a statement last week.

“My comment; I adore Thom, like LOVE him. This is surprising to me, he hasn’t been paid yet, he will be…not because he’s trying to “expose” me but because he deserves it. I only got two texts, no calls, I was over seas opening my tour & that video has only been out for 2 weeks,” Hall wrote.

Drag queen Manila Luzon seized on Hall’s response to call him out for allegedly not paying for a Halloween party hosted by the entertainer last year.

“Well you still owe me for hosting your Halloween party since LAST YEAR so,” Luzon wrote.

Well you still owe me for hosting your Halloween party since LAST YEAR so… pic.twitter.com/3MrjXxw6IV

“@todrick hasn’t paid a makeup artist I know from Oz and a wardrobe stylist from Haus Party. He’s notorious for taking people’s creatives and not paying them, and then blocking them when they try to retrieve payment or threaten legal action,” Luzon added.

@todrick hasn’t paid a makeup artist I know from Oz and a wardrobe stylist from Haus Party. He’s notorious for taking people’s creatives and not paying them, and then blocking them when they try to retrieve payment or threaten legal action.

We’ve reached out to Hall and McKissock.