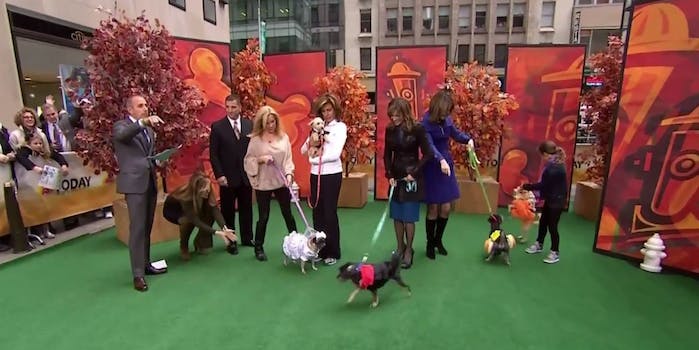 Animal advocates are in an uproar over a recent decision by NBC’s Today Show to cancel a popular segment that featured shelter dogs and cats viewers could adopt from Animal Care and Control (AC&C). The monthly segment, “Bow to Wow,” ran for about six years and had a 100 percent adoption rate.

Over the past few weeks, animal advocates have been building an online campaign to protest the network’s actions. The segment was apparently cancelled quietly at the end of October—which, ironically, was Adopt a Shelter Dog Month—but it wasn’t long before advocates found out and started to spread the news online. AC&C, which worked directly with the show for the segment, released a statement on its website:

“While AC&C is disappointed about this decision, we are grateful for the six-year relationship with NBC and the monthly segments that have featured abandoned and homeless cats and dogs from AC&C,” the organization wrote. “AC&C appreciates the efforts of animal advocates and families who are actively reaching out to NBC’s Today Show producers to reinstate the ‘Bow to Wow’ segment.”

Not content with press releases, furious animal advocates have taken things into their own hands. Three different online petitions have picked up steam over the last week, gathering more than 3,800 combined signatures.

“Our wonderful dog Max was on your show. How awful to think of all those terrific pets waiting for homes and people not knowing where to go for them,“ wrote Amy Cherry on MoveOn.org.

People also took to Twitter to spread the petitions, voice their support of the segment disappointment with the show’s decision.

NBC has yet to comment on the matter. Animals have continued to appear on the show in segments and for special events. The show even threw a puppy party in its new Orange Room earlier this month to celebrate reaching 2 million followers on Twitter. The puppies were guide dogs-in-training from Guiding Eyes for the Blind, and their antics were livestreamed on the Today website.

According to Main Line Animal Rescue’s press release, the ASPCA also sent a letter to NBC urging them to reinstate the segment. Other organizations and individuals are expressing their dismay via Facebook.

“So sad that Today Show will not have ‘Bow to Wow’ on anymore,” Dana Gonzalez wrote on NBC correspondent and ‘Bow to Wow’ segment host Jill Rappaport’s page.

Anyone interested in finding out more about adopting the animals from AC&C that would have been featured on the segment can go to their website or send them an email at [email protected].