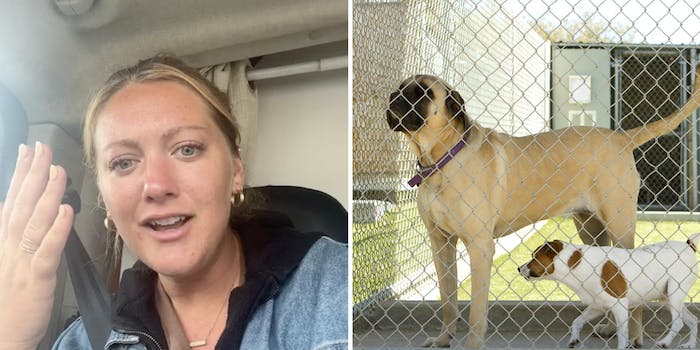 'I literally paid to board my dog, and that's what you guys did.'

A woman says a dog boarding facility asked her to leave a tip after picking up her dog, which sparked a debate about tipping culture on TikTok.

The woman, Lauren Romeo (@laurenromeo__) on TikTok, vented about the incident in a video. As of Wednesday, that video received about 170,000 views on the platform.

“Tipping culture is getting way too big right now,” Romeo says in the video.

“Please leave your tips in cash”

The TikToker says she understands tipping service industry workers, such as restaurant servers, and that she always tips 20-25%.

“I get it, it’s expected, like I’m happy to tip them,” Romeo says. “It’s also another conversation that they just need to be paid more.”

But for Romeo, tipping culture got out of hand when her dog’s boarding facility asked her to tip. She says she received a text notification that her dog was ready to picked up and that the facility only accepts cash tips. She says the facility told her to “please tip in cash.”

“Why was I even expected to tip in the first place?” Romeo questions. “I literally paid to board my dog, and that’s what you guys did, like you didn’t give any extra service.”

The TikToker asks if she is in the wrong for having such a reaction. She adds that she never even told the facility she planned to tip, so it shouldn’t have told her to tip in cash.

Many viewers sided with Romeo, saying she shouldn’t be expected to tip the boarding facility.

“Uhmmmm I with you, that’s super weird. Not only to ask for the tip, but to expect one when they set their pay rates..?” one viewer commented.

“Whoever told you ‘we only take cash tips’ was swindling you. They probably got tipped once unexpectedly and ran with it,” another said.

Romeo apparently isn’t the only one who thinks tipping culture has gone too far. Several viewers shared their own stories of when they were asked or expected to tip for something they didn’t think was necessary.

“I ordered something online and it asked if I wanted to tip them… like WHAT,” one user said.

“right?? I went to a concert the other day and got merch and was asked if I wanted to tip. like tip for what? you handing me a shirt??” another user wrote.

One user commented, “they asked for a tip at the THRIFT store on the little ipad like for what??”

Another user commented, “i got asked to leave a tip at a self checkout the other day, i am not kidding.”

Several viewers said their “rule” for tipping is that they only tip workers whose income relies on tips, such as restaurant servers.

“My rule is that if their pay is consistent and constant (retail workers, vets, etc.), then they don’t get tipped. If their pay depends on performance or is compromised because they’re in the service industry, they get tipped. I literally do not understand why everyone has an option for tipping,” one viewer commented.

The Daily Dot reached out to TikTok user @laurenromeo__ via TikTok comment.