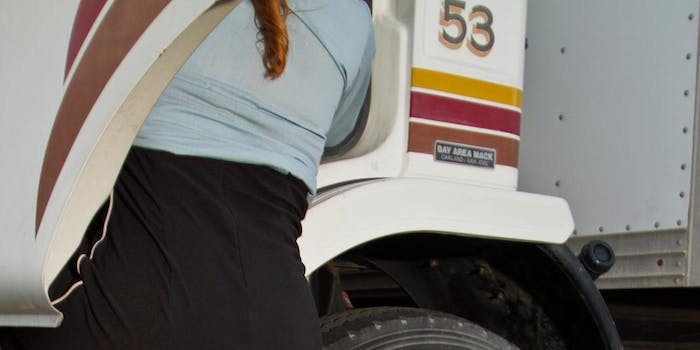 This ‘Hookup Truck’ is basically Tinder on wheels

Remember how your friend Greg in high school was the first kid in your grade to get his license, so he started giving everyone rides and and by the end of spring semester at least 40 percent of the grade had had sex in his Kia Sorento? Now, there’s a grown-up version of Greg’s car roaming the streets of San Francisco: the “Hookup Truck,” a mobile art installation that provides a venue for Tinder users who want to do the sex with one another.

Created by artist Spy Emerson, the hookup truck offers “private, secured rooms” for users, as well as “complimentary birth control and other STD preventatives.” Today, it’ll be roaming the streets of San Francisco, making itself available for any Bay Area couples who might be in the mood for a little mobile lovin’. All you need to do is make a 30-minute appointment in advance.

“This is a game for adults who want to play with sex,” Emerson told CBS San Francisco. “You have to be nice, and cool. No drunks, but everyone is welcome to join us. There will be a party going on all the time.”

At this point, you might be wondering: What, exactly, is the hygiene situation of the Hookup Truck? While one would assume it wouldn’t be too great (I’m thinking the pillows in particular would be covered with more stray pubes than the bottom of a wastebasket of a Korean nail salon), Emerson says that the truck’s designated sex room has been designed “with cleanliness in mind”: “Everything is wiped down and cleaned before and after every person,” she says. “It’s probably cleaner than the BART or any public toilet you’ve used.”

So there you have it, folks: If you’re on a Tinder date in the San Francisco metropolitan area, and you see Spy Emerson roll by with her hookup truck, feel free to hop on in! At the very least, it’ll be more comfortable than the back of Greg’s Kia Sorento.