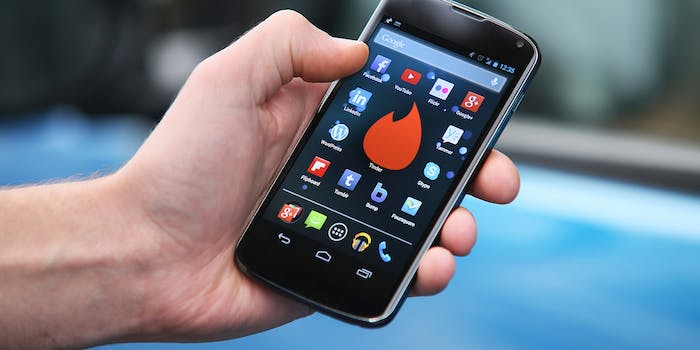 People are suing Tinder for false advertising, because it’s 2015 and that’s a thing that people do now.

Earlier this month, the dating app announced its new paid version, Tinder Plus, which allows users to undo an accidental left swipe and look for people in locations beyond their immediate vicinity. These incredible features can be yours for just $9.99 per month.

But some avid swipers who refuse to pony up the money are fighting back in the form of a class-action lawsuit. Florida resident Billy Warner is the fearless leader of this charge. He’s angry because of the restrictions that Tinder has put on its free users since launching Plus.

Now, instead of listlessly liking ladies to your heart’s content, there’s a limit to how many users you can swipe right on—the company’s no-so-subtle way of encouraging you to buy Plus. Warner and co. are not amused.

In the complaint, obtained by Fusion, the plaintiffs allege that the Tinder overlords planned to screw them all along.

“[Tinder] offered these free services with the goal in mind of enlisting a user base of tens or hundreds of millions of users, with the ultimate goal of later changing the rules of participation and deceptively and forcibly migrating a substantially percentage of its user based to a paid subscription model.”

The suit, which was filed in California claims that Tinder’s actions violate the California False Advertising Act and the Business and Professions Code. Warner and his co-plaintiffs said they have “suffered injury” and “have lost money or property,” leading them to sue for restitution of funds “improperly obtained by [Tinder]” along with statutory damages.

“The fact of the matter is, Tinder’s still advertising as a free app,” Warner’s lawyer Todd M. Friedman told Fusion. “If you’re gonna advertise yourself as a free app, then why are you charging people?”

For its part, Tinder’s parent company IAC has decided to swipe left on caring. The company issued a statement reading in part, “We normally don’t comment on pending litigation, but on this one we just can’t help ourselves: it’s downright silly.”