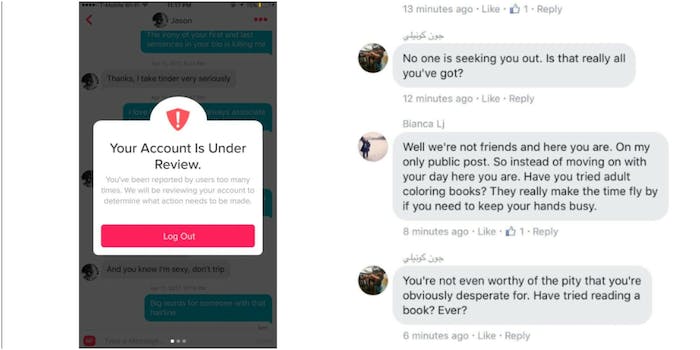 Why was this woman who stood up to abusers banned from Tinder?

Tinder claimed she was the harasser.

23-year old Bianca Lentini makes her stance in the dating app Tinder crystal clear. After a brief description of her personality, the self-described intersectional feminist warns would-be suitors in the app to swipe left if: “You open with ‘hey’ ‘you’re beautiful’ or a GIF; You’ve never protested; All lives matter/Blue lives matter; You support Trump & co; Young Metro don’t trust you.”

Still, Lentini receives enough death, rape, and deportation threats from male users to fuel a cringe-worthy Instagram account. So she began posting to @WhyDidYouSwipeRightTho in December, and it now has more than 6,500 followers.

Lentini doesn’t just screengrab the abuse, though. Fed up, she began reporting men for violating Tinder’s terms of service, then emailing Tinder to follow up on the reports after she didn’t see any action on the accounts. And that’s where things took an outrageous twist: Tinder eventually suspended Lentini.

When Lentini requested an explanation, Tinder cited prohibitions against racist or harassing behavior, asking for money on the platform, or sharing “screen scrapes.”

In an interview with Bust, Lentini explains her side of the story. While she was distributing screen grabs from the app (both her own, and those of friends and followers), she’s certainly not an outlier in doing so. Numerous other Twitter and Instagram accounts, such as @TinderNightmares and @TinderConvos, share screenshots from the app. (However, unlike some posts, she does not censor users’ names or locations.) As for the “asking for money” bit, Lentini explains that away as sarcasm in a few conversations. She told some men to PayPal her money in return for requests for unpaid labor.

“Her previous account was banned for violating our terms of service,” a Tinder spokesperson told The Daily Dot. “Her current account is active. The users she reported were investigated by our community team and were either banned or received warnings as a result.”

Lentini—who has indeed set up a second account that is currently active—feels the real reason she was banned from the app was simply for sticking up for herself and reporting men “too often.” That could be the case, but there is an issue with the situation: Lentini wasn’t just using Tinder as a dating app.

In an Instagram post, she writes, “I don’t actually give a damn if I can use Tinder…The point was not to find my soulmate. [The] point was to kill time and now show how fucked up men and Tinder are.”

With that in mind, it’s possible that Tinder’s reasons for reviewing and banning her account were valid. Even in some of her own screen grabs, Lentini’s responses border on antagonistic. Why not just swipe left? Why not just quit chatting, rather than let the conversation run to an abusive place?

Regardless of whether she egged some of her abusers on, her account, and her experience, shows the difficulties women face in the dating world. That “no” never means “no,” that boundaries aren’t respected, that many men handle rejection by lashing out at their rejector. While her behavior wasn’t always polite, the responses she got—sometimes the initial messages—were often even worse.

Lentini’s Instagram account is about exposing the double standard: that men can essentially say whatever they want and get away with it, but when a woman does the same, she’s punished. According to Tinder, there is no double standard—men that abused the service were either warned or banned, and when Lentini’s behavior crossed the line, hers was as well. Lentini clearly doesn’t feel that way, though.

Lentini plans to continue her mission of documenting the abuse and hatred women experience online—both her own and that of others.