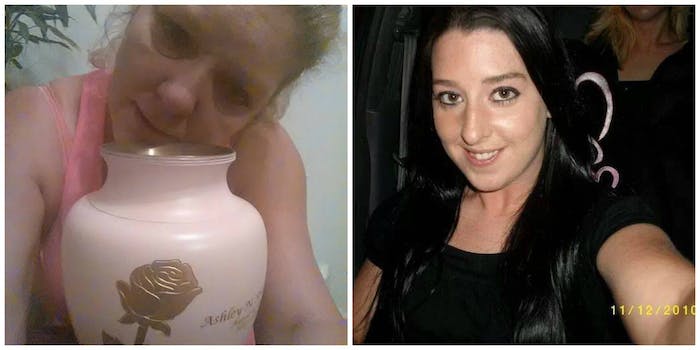 Heroin deaths are on the rise—and this mom has not been afraid to speak out.

Louden posted the message on Facebook on what would have been her daughter Ashley’s 28th birthday. Three years ago, Ashley died from a heroin overdose.

“I don’t normally post pics like this, but let’s make this go viral so all the drug dealers see what they are doing to our families,” she wrote on the page Heroin Kills You. It has since been shared over 250,000 times, with over 88,000 likes. 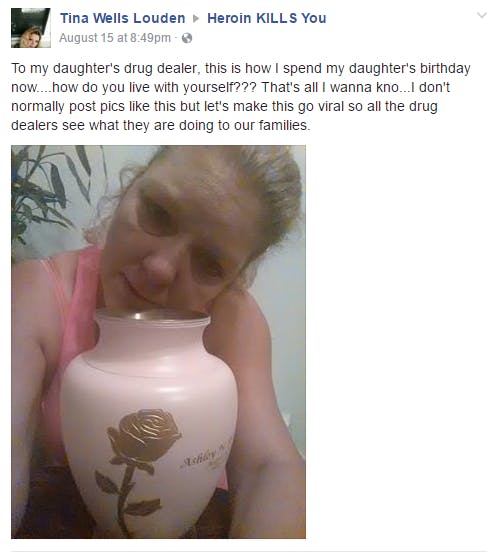 The response to the post has been mixed, with some commenters accusing Louden of being blind to her daughter’s addiction. But Louden remained committed to her message, blaming dealers for “selling poison to our children all over the world.” 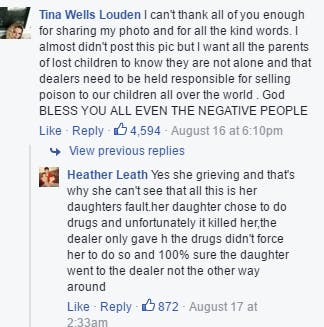 Earlier this year, the DEA announced that heroin deaths have spiked from 3,036 in 2010 to 10,574 in 2014. The rise has been connected to the spread of drug trafficking and increased opioid use, as well as the popularity of heroin adulterants like fentanyl.

Before death by overdose was shrouded in secrecy and shame. But recently, many parents like Louden are speaking out about their children and their addictions. ABC affiliate KVUE reported the virality of the post has meant a lot to the Louden family.

“It’s awesome how such a simple picture would be so powerful and meaningful,” said Heather Louden, Tina’s daughter and Ashley’s sister.

“Maybe it would change somebody,” Tina said to KVUE. “We live through this pain, every birthday, every holiday, it’s not the same. Part of our heart is gone.”