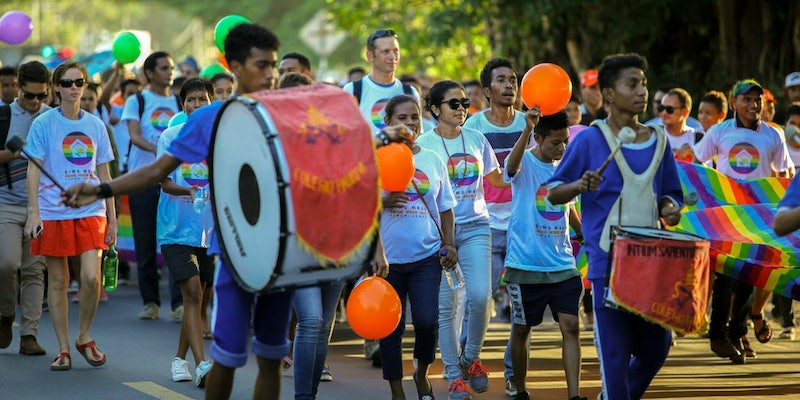 The Asian country of Timor-Leste held its first Pride march, and it was glorious

The first Pride march was held in the southeastern Asian country of Timor-Leste last weekend, and according to one of the organizers, it was a smashing success. Natalino Ornai Guterres told Out in Perth that between 500 and 1,000 people attended last week’s Pride events, which featured talks about how to keep LGTBQ youth safe, a concert, and the march in the capital city of Dili.

Backed by Timor-Leste Prime Minister Rui Maria de Araújo’s recent message of support for the gay community, the theme of this year’s march was “acceptance,” and reportedly, hundreds of people joined with a marching band to participate in the Pride parade.

Here were some of the best photos and videos posted to social media, via Gay Star News.

" I accept & respect the differences between people. How about you?" Supporting 1st #PrideTL March in #TimorLeste pic.twitter.com/i8igjeLqyy

Timor-Leste, aka East Timor, is a small nation between Indonesia and Australia. It declared independence from Portugal in 1975, and after a two-decade takeover of the country by Indonesia, the country finally received its independence in 2002.

As the prime minister said in his recent video, via Out in Perth, “Discrimination, disrespect, and abuse towards people because of their sexual orientation or gender identity does not provide any benefit to our nation.”

As Mashable points out, though, same-sex marriage is still not recognized in the country.