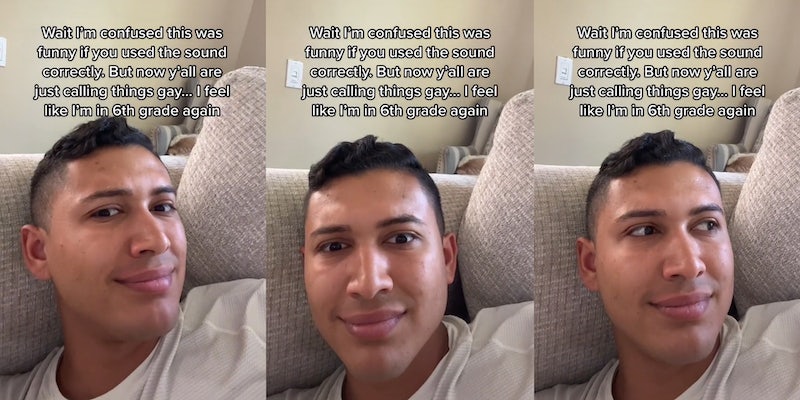 Some straight TikTokers are using the lyrics to perpetuate homophobic stereotypes.

“How can I be homophobic? My bitch is gay” is Central Cee’s focal question in his song “Doja,” which blew up on TikTok in mid-July. But with over 420,000 videos that use the sound on the app, queer TikTokers and their straight counterparts have used the song differently.

And as it turns out, straight TikTokers can, in fact, be homophobic.

Queer TikTokers subverted Central Cee’s song by using his lyric about a “bitch” being “gay” to make videos about actual gay and/or queer people: Queer folks identified themselves, queer family members, and/or their queer partner as the “bitch” who is gay.

While it’s unclear if Central Cee’s song is meant to be inclusive or actually homophobic, some straight TikTokers are using his lyrics to perpetuate homophobic stereotypes about their straight partners or friends.

Because the TikTokers linked in the previous paragraph—and many not included in this column—are being homophobic.

Saying that skinny jeans are “gay,” whether you mean to insult skinny jeans or say that they are something only gay people wear, is homophobic. And that goes for any of the behaviors listed above.

Queer TikTokers have called out the homophobic version of the trend as well: Kenneth Pabon posted a TikTok saying that when the sound is used correctly (or, by and about actual gay people), the trend is “funny.” Otherwise?

“Y’all are just calling things gay,” he wrote in his TikTok’s overlay text. “I feel like I’m in 6th grade again.”

Similarly, @antheiamae called the trend “straight homophobia” in their TikTok about the homophobic trend.

Didn’t Hillary Duff put an end to using the word “gay” as an insult in 2008? What if every time something was bad, everybody said “ugh, that’s so TikToker being blatantly homophobic?”