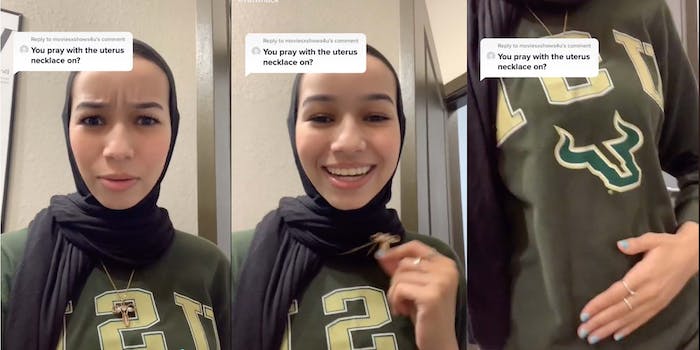 ‘I also pray with my uterus inside me’: TikToker brilliantly shuts down troll who criticized her for wearing uterus necklace while praying

‘You're acting like this is some sort of evil symbol.’

In a video posted on Aug. 12, a Muslim TikToker clapped back at a commenter who asked her if she takes off her necklace, which is gold uterus adorned with pearls, to pray.

“I also pray with my uterus inside me as well. Should I take that one out?” the TikToker, @ratwhack, says in response to the critic.

“You’re acting like this is some sort of evil symbol,” the TikToker says.

The user had questioned the popular TikToker, who has 55,600 followers, “You pray with the uterus necklace on?” @ratwhack identifies herself as Muslim in one of her other TikTok videos.

@ratwhack’s video was met with an overwhelming amount of support. “It’s an organ why are people so offended,” one said.

Another lauded the TikToker’s “patience.” “Girl I do not know how you have the patience for this. My brain cells are fried by these comments everytime you’re on my fyp,” another said.

The necklace has garnered many comments across @ratwhack’s videos, with some even mistaking it for a cross.

Many of @ratwhack’s videos focus on menstruation and reproductive health, which some folks in her comments take issue with. As of late, @ratwhack has been speaking on whether or not using a tampon is haram, or forbidden by Muslim law.

The Daily Dot has reached out to @ratwhack.