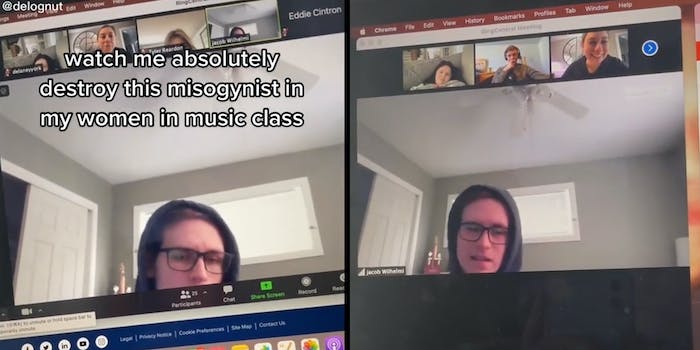 ‘Not the teacher smiling the whole time while you casually annihilate the misogynist’: TikToker shuts down classmate who says that Beyoncé is not a good role model in ‘women in music’ class

The teacher's handling of the debate is being criticized by viewers.

In a viral TikTok video, a student shuts down her classmate who claimed Beyoncé is not a good role model while in their “Women in Music” class.

“I think to say overall, she’s just not a role model you should look up to. Nothing against her. It’s mostly because of the sexualization,” the TikToker’s classmate says in the Zoom course.

She notes Beyoncé’s efforts toward the Black Lives Matter movement, including her “Formation” music video and bringing the mothers of Eric Garner, Mike Brown, and Trayvon Martin to the 2016 Video Music Awards. York also cites the Humanitarian Award the popstar received from Michelle Obama at the 2020 BET Awards.

“Michelle Obama thinks she’s a perfect role model for her kids, and I trust Michelle Obama,” York says, and her professor giggles in response.

“She’s just relatable. She shows women that they can be themselves. So, I don’t really care whatever that guy was saying. She’s an amazing role model,” York says.

“Delaney, it sounds like you’re a fan,” the professor responds.

“I don’t even listen to her that much; she’s just very much a good role model,” York says.

“Jacob, you good?” the professor asks her classmate after York’s defense.

In a follow-up video, York shared his response.

“Yeah, I’m good,” he says. “That’s probably just a different perspective in general. The issue that I’m kind of seeing is, rather than a source of empowerment, … I’m seeing hypersexualization in our society become more of a prominent issue and more of a thing that is happening. I see it as more of a bad thing.”

York’s take-down received over 2.8 million views, and several users showed support for her argument in the comments.

“Bby u shaking so much, I feel that … proud of you for standing up,” one user said.

“He is he over sexualizing beyoncé to begin with, i don’t think of [sex] when i think of beyoncé,” another said.

“This is really great, also the stigma of black women ‘hypersexualization’ is probably why bro is saying stuff like that. He’s stuck in the stereotypes,” a third said.

Others noted the teacher’s laughs throughout York’s defense.

“Why did [your] teacher say period like that,” one user said.

“Not The teacher smiling the whole time while you casually annihilate the misogynist,” another said.

However, some were critical of the professor’s response to York.

“That teacher i feel didn’t take this seriously,” one user said.

“Idk the teacher rubbing me the wrong way like what does being a fan have to do with straight facts,” another said.

The Daily Dot reached out to York via Instagram direct message.