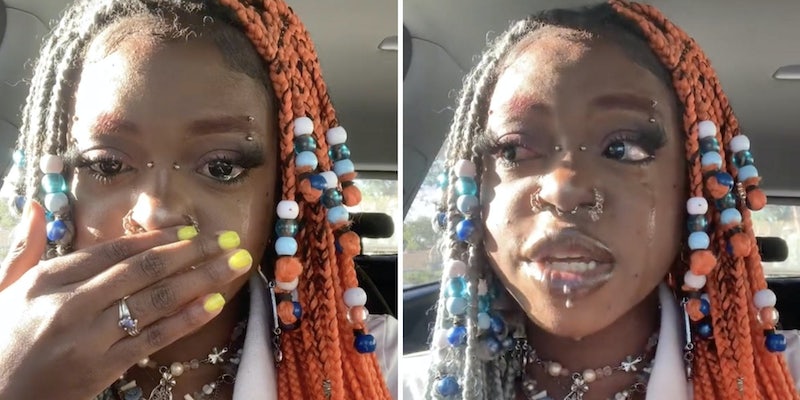 ‘Take them to court’: Popular TikToker says she was racially profiled while trying to deposit rent money at Citibank

'I can’t pay my rent right now because of f*cking racist-a** b*tches who work at f*cking Citibank?'

A musician told her nearly 1 million followers that she was racially profiled while trying to deposit a check at a Los Angeles Citibank.

Her video telling the story currently has over 8.5 million views and closes with her threatening Citibank with a lawsuit.

In the video, Baby Storme (@babystorme) cries in her car.

“I’m not the kind of person to come on here crying,” she says. “But fuck Citibank.”

In the remaining two minutes, she tells a story of her attempting to deposit a check from her father at Citibank. The check was for $30,000 and was to be used to pay a year’s worth of rent.

When Storme offered for the teller to call her father for verification, she says the teller refused and said that the bank would instead be confiscating the check.

After a bit of arguing, Storme says she directly asked the teller if the bank confiscates every check they cannot verify. The teller, she says, replied with “no.”

“So why are you confiscating mine?” she recalls questioning. Rather than responding, she says the teller instead threatened to call the police and told the other staff to lock Storme in the store. Storme says she had also been recording the interaction, causing the teller to tell her to delete her videos. Storme says she did not.

She says the police eventually arrived and allowed her to depart with her check.

After reflection, Storme says of the confiscation: “We all know why she fucking did that.”

“I’m so upset, because I hear everyone talking about racial profiling and stuff, but at the end of the day, I just can’t even—this is my fucking rent money,” she states near the end of the video. “I ended up getting [the check] back… But to think that I can’t pay my rent right now because of fucking racist-ass bitches who work at fucking Citibank?”

She closes with a simple question: “Guess who’s suing Citibank?”

In the comments section, users rallied behind Storme.

“Sue them! Drain their pockets!” one user urged. “We’re here for you.”

Others backed up the idea that confiscation was not typically part of the check verification process.

“They supposed to call his bank, give them the account and check number, and verify he got the funds to cover the amount,” a commenter claimed. “That’s that.”

“If they actually believed it was fraudulent they could have at least called your dads bank to verify funds,” another shared in agreement.

“I work at a bank,” a TikToker claimed. “What they did was unethical. The only time they can do that if it’s fraud. They didn’t even try to verify it.”

Storme later posted a video taken from inside the Citibank backing up her version of events.

This video only strengthened users’ sentiment that Storme should pursue a lawsuit, though many also commended her for her strength in the situation.

“You did so good defending yourself!” a user exclaimed.

“Definitely sue and have rent paid for the rest of your life,” another urged. “All of this sounds very illegal.”