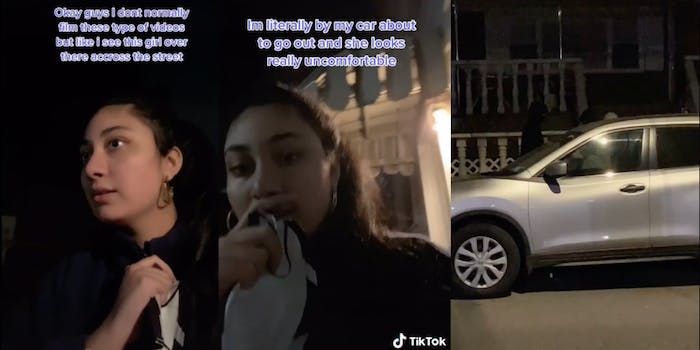 TikToker saves girl from ‘creepy’ man asking about her toes

'You probably just saved a girl from getting kidnapped.'

A woman on TikTok recorded herself helping another girl who looked like she was in an uncomfortable situation with a “creepy” man.

In the clip, the TikTok user, @pikanab, says she was about to get into her car when she spotted a man talking to a woman across the street.

“OK guys, I don’t normally film these types of videos,” she says. “I’m literally about to go out, but she looks really uncomfortable.”

“I don’t know if she’s going somewhere, it’s like really late at night,” she continues.

She then turns the camera, so viewers see a grainy picture of a man dressed in all black talking to a girl. He is also wearing a black face mask.

“OK, I’m from New York, girls supporting girls. I’m just going to go up to her,” the TikToker concludes.

The woman then walks across the street. As she gets closer, she pretends as if she knows the other woman and says she’s been waiting for her at her car. She then asks who the man is and what he wants.

The man responds by saying he was talking to the other woman about her feet. “Just asking her if her … toes are long,” he says. Clearly disturbed, the TikToker tells the other girl “we gotta go” and that she thinks they should leave. The two run off together, and the TikToker offers her a ride to wherever she needs to go.

The video of the encounter has been liked nearly 8 million times since being posted on Friday. In the comments, many people praised the filmer for stepping up.

“You’re amazing for this,” one user wrote, according to Mirror.

“You probably just saved a girl from getting kidnapped,” another said.