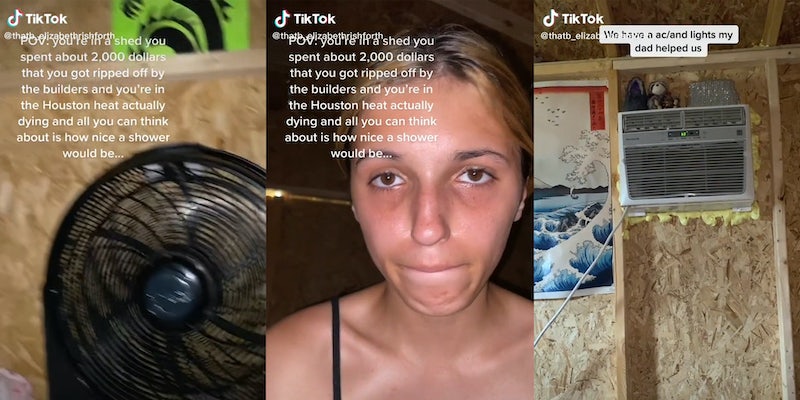 ‘Why did you think you were gonna get a livable place for $2k’: TikToker says she got ripped off after she bought shed to live in for $2K, sparking debate

'We are literally in the middle of a housing crisis.'

In a viral video, TikToker @lilbitrish420 complained about the heat in the shed she spent $2,000 on.

“POV you’re in a shed you spent about $2,000 that you got ripped off by the builders and you’re in Houston heat actually dying and all you can think about is how nice a shower would be…,” the overlay text on the video reads.

The TikToker used the trending sound “I wanna go home” by Esosa in her video.

The housing crisis in America, brought on in part by the COVID-19 pandemic, has caused rent to go up and all-cash offers to be prioritized by sellers over a traditional mortgage. Records show house affordability has never seen a decline as sharp as the one prospective homebuyers are currently facing.

The comments section of the TikToker’s video is divided as some users offer help, while others chastise her decision to live in a shed.

“Not everyone is able to do the things mentioned in these comments. We are literally in the middle of a housing crisis. There’s a lot that could be done with that shed. I’ve seen so many finished that are great. Don’t be so negative,” one user commented.

“Y’all shoulda gotten them mini home depot houses,” another user said. The TikToker responded and said she thought that’s what she thought it was.

“Do you need a place to stay? The heat is brutal. I live in Texas! My living room is open,” a third user said.

“Why did you think you were gonna get a livable place for $2k,” another used commented.

In a second video, the TikToker shared that her shed situation may have been influenced by the fact that the builder was reportedly trying to hit on her. The overlay text reads, “POV the guy that built the shed was trying to use you to cheat on his wife and got all hurt that my boyfriend was the one who was texting him acting like me.”

@a_nobody_goodbye Man thought i was flirting with him when it was my mans number🤡💀#yougotchrissed #hahahah #goofy #fyp #wishiwasjoking #truestory ♬ you just got krissed. – logan

In a final update video regarding her living situation, the TikToker shared that she now has an air conditioning unit and lights installed in the shed.

@a_nobody_goodbye We do in fact have ac. So thank yall for all the comments on it. #PlutoTVIsFree ♬ original sound – lilbitrish420