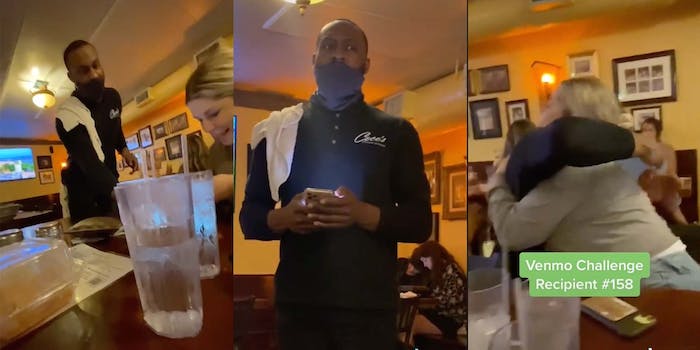 ‘This brought tears to my eyes’: TikToker surprises waiter with crowdfunded Venmo tip

In a video posted on Aug. 22, an influencer on TikTok tipped a server $1,000 after crowdfunding the tip on the platform.

The influencer who posted the video is Lexy Burke, whose handle is @lexylately and refers to herself as a “Serial Tipper.” Burke has over 1.6 million followers on the platform and often collects money from them to make someone’s day by tipping them exorbitantly via Venmo.

The video starts with Burke asking the serve named Al for his Venmo. Burke sends Al the $1,000 tip to Al via Venmo, leaving him stunned. “No. No,” he says in disbelief. “That’s not real life.”

Burke tells him that she goes around leaving massive tips with the help of TikTok.

“Y’all are nuts, in a good way,” says Al after thanking and hugging Burke. “In a great way, in a vessel sent from God.”

The video has been viewed over 1.2 million times and liked over 200,000 times since being post on Aug. 22. People in the comments section of Burke’s video commended her for using Venmo rather than tipping through the restaurant.

“I love how you do Venmo payments so the restaurant owners can’t force the server to split the tip,” wrote @nicolee1333.

“As a server, if someone came to my section and did this, I’d simply pass away,” wrote @jordynmarie1027. “What you guys are doing is so good.”

“This brought tears to my eyes as a server,” a third said.

According to her TikTok, Burke has tipped over 150 times and organizes the money she receives from followers in rounds. She has run 21 rounds thus far. In addition to tipping servers and bartenders, Burke also tips musicians. She’s even gotten country musician Chris Young in on the challenge.

The Daily Dot has reached out to Lexy Burke.