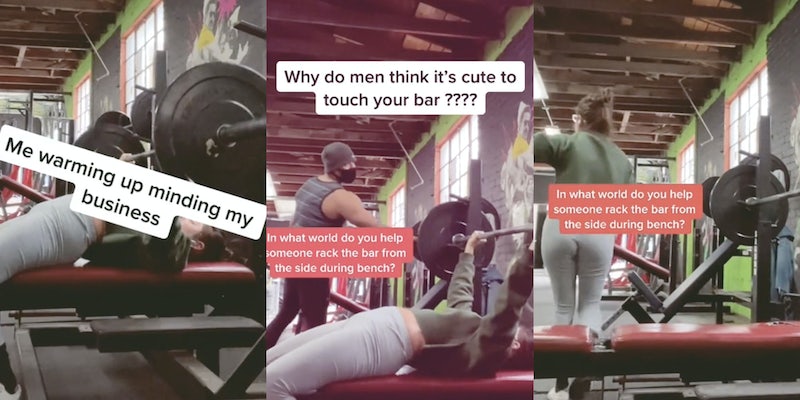 ‘That is so dangerous wtf’: TikToker goes off on ‘gym creep’ who tried to help her lift without consent in viral video

'He could [have easily] injured you just by doing it.'

A TikToker filmed herself telling off a man at the gym after he allegedly followed her around and tried to help her during her workout. The video, posted to the platform, sparked a discussion.

The video shows a man surprising the TikToker while she’s lifting, attempting to motivate her to stand up. She tells him to leave. The TikTok already garnered over 2 million views.

TikTok commenters were appalled by the man’s brazenness, especially due to the fact that surprising someone mid-lift could potentially lead to injury.

“That is so dangerous wtf,” one wrote. “esp when you clearly have headphones on.”

“He could [have easily] injured you just by doing it,” another commenter said. “Glad you stabilized it.”

Other women joined in to share similar stories from their experiences at the gym.

“Last week after finish my last set on the leg press [an] older man went and started rubbing my knee… telling me to be careful,” one woman remarked.

“I had to stop going to this gym [because] I felt so unsafe all the time!” another wrote.

Even more frequent gym attendees said such behavior would not be allowed in their gyms.

“As a gym attendant, if you showed me this video he would have his membership revoked that day and you would be escorted out at the end of your sesh,” one TikTok commenter declared.

While many commenters begged for @dezsquats to do a storytime explaining the whole situation, she reveals in a later video that there’s not much to explain besides what happened in the original TikTok.

“There’s no story,” she says in a follow-up TikTok. “He was following me around the gym, and I just went off and told him not to touch my fucking bar.”

In the description of the follow-up video, @dezsquats says that she no longer goes to the gym featured in the original video, though she does not clarify whether the man was the motivating factor in her leaving.

“He never tried to defend himself or anything,” she shares in another follow-up. “He kind of just got scared and went back to doing whatever workout he was doing.”

For skeptics who claim that the man was simply trying to fix her form, @dezsquats notes that surprising someone from the side while they are already lifting is not the proper way to assist in a lift.

In another TikTok, she shows the proper way someone can assist with a lift.

Many commenters across all videos noted that men should take this series as a lesson.

As one commenter explained, “Guys just don’t get if we don’t ask for your help then we don’t need you.”

The Daily Dot has reached out to @dezsquats.