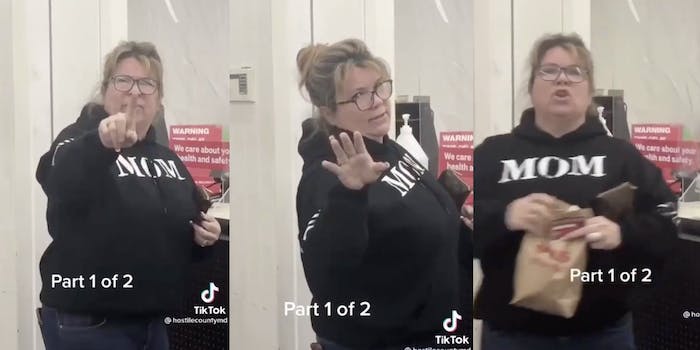 'You are just the worst person.'

An anti-masker “Karen” in California was deemed “the worst lady” by the TikToker who confronted her because she refused to wear a mask at pharmacy—and take others into consideration.

The first video, shared by user @hostilecountymd last month, shows the woman standing right up at the pharmacy window sans mask despite there being a mark on the floor roughly two feet behind her indicating where she should be standing.

“You’re putting all these employees at risk,” says the man filming. “Especially because this is a pharmacy, which means the people that come in here are sick.”

The woman dismisses him with a wave of her hand but otherwise ignores him. “But you don’t feel any guilt,” the man presses. “You don’t feel bad about this. You don’t worry. Because it’s just your world.”

“That’s all you care about. Just you.”

At this point, the man recording is close enough that the anti-masker’s sweatshirt is somewhat readable — it’s a definition of “Mom” as someone who will “care, nurture, and love.”

“I’m asking you for just the basic decency of caring about another person,” he says.

“I care plenty,” she claims. “You’re the problem with this country. You’re self-centered, trying to control people.”

“Self-centered? You’re the one putting everybody at risk,” he fires back.

At that point, the woman takes her bag and walks away, veering close enough to the man to pointedly blow in his face as he goes.

A second video shows that he sees her again in the parking lot where he comments on the fact that she parked her car randomly rather than in anything resembling a parking spot, and tosses her cart off to the side rather than returning it to a cart corral.

“You are just the worst person,” he tells her.

Although the video was originally shared back in February, it started recirculating again this month as people reflect on spending the last year dealing with the pandemic. The situation could have gone very differently in the United States if people had taken the virus seriously from the start instead of insisting the personal freedom to not wear a mask trumps public health.

“Selfishness is one of the most consistent defining characteristics of conservatives,” one Twitter user commented. “Always me first without considering at all how their actions affect others. And for many, they seem to love that their actions negatively affect others.”

Another pointed out that it’s kind of ridiculous that this woman appears to “[believe] in enough science to use medication but not enough to wear a mask.”

Twitter sleuths dug up the woman’s name based on her personalized license plate, though it appears she deleted or made private her social media accounts after the videos went viral.