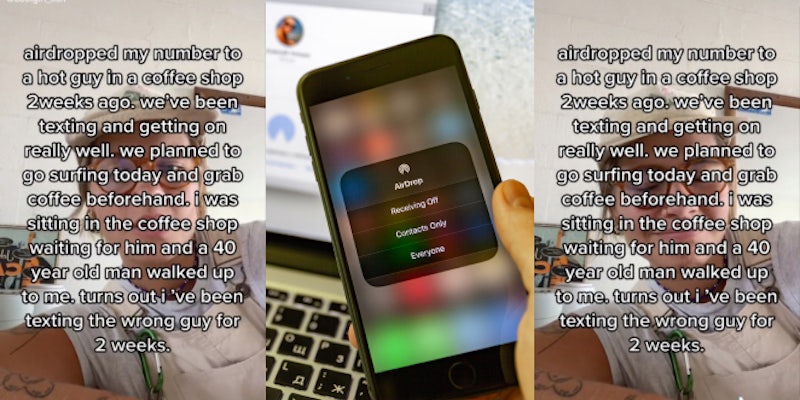 ‘A 40-year-old man walked up to me’: Woman AirDrops her number to ‘hot’ stranger. She ends up meeting up with someone else

A woman says that after AirDropping her phone number to a stranger and texting him, she realized she was talking with a different man than she thought when they met up.

Lish (@coolgirl_lish) posted a TikTok on Aug. 1 saying that she AirDropped her number to a “hot guy in a coffee shop” and texted him for two weeks. Lish says they made plans to grab a coffee and go surfing.

“I was sitting in the coffee shop waiting for him and a 40 year old man walked up to me,” Lish wrote in her TikTok’s overlay text. “Turns out I’ve been texting the wrong guy for two weeks.”

In the video’s caption, Lish wrote that she hopes she finds “the real guy.” On Wednesday, Lish’s video had over 109,000 views on TikTok.

Commenters on Lish’s video were blown away by the turn of events she described.

“I literally put my hand to my mouth and gasped,” @evalicious.8 commented.

“A literal movie,” @maiyajustine wrote. “Write a book [about] it.”

Others hoped Lish made it work even though the person she had been talking to wasn’t the man she thought he was.

In a comment on her TikTok, Lish said that the 40-year-old man “took it well” when she told him “it wasn’t going to happen.”

Another commenter said they were about to commend the TikToker for her use of AirdDrop—until she read the entire text of the video.

“I was about to say wait airdropping is such a good idea,” @killedtheradiostar commented. “But I guess not lmao.” Lish replied to another comment saying that she will “never using airdrop again.”

The Daily Dot has reached out to Lish via TikTok comment.