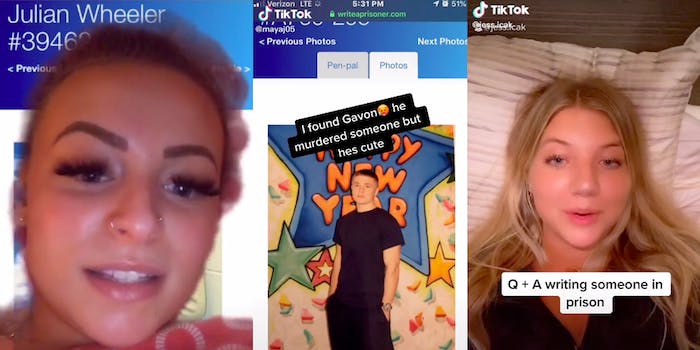 ‘He murdered someone, but he’s cute’: TikTokers are writing letters to prisoners

'If you're like me, and you really want a boyfriend, all you have to do is go to WriteAPrisoner.com.'

A new trend is emerging on TikTok in which users are writing letters to incarcerated people. Using the hashtag #WriteaPrisoner, people are told to use a website called WriteAPrisoner.com, where they are connected with someone who is currently behind bars. TikTokers show examples of letters, poems, and even “mixtape” song lists they send to their pen pals.

The trend has been circulating on the app since January and currently has over 85 million views. There are many different forms of communications people can choose from on the site—from video calls to emails, or letters. On the website, people are able to connect mainly with those who are incarcerated in the United States, but there is a small pool of international prisoners they are able to chat with as well.

One TikToker named Emily explained why she decided to participate in the trend in a TikTok video. “Lockdown’s had me really bored so I found this website called WriteAPrisoner.com, and you can literally just browse through a load of inmates in prison all over the USA,” she said.

“I reached out to get to know him, not about what he did,” she said. “I actually don’t think it’s any of my business.”

Amaya, a 17-year-old TikToker, also partook in the trend.

“So, I heard if you’re like me, and you really want a boyfriend, all you have to do is go to WriteAPrisoner.com, and you can find an inmate and become pen pals. So after searching for a while with no avail…” she continues, before the video is cut short.

But, in the video, she shows a photo of her pen pal, Gavon, a 19-year-old inmate sentenced to life in prison for the aggravated murder of an elderly victim, aggravated robbery, kidnapping, and abuse of a corpse.

Over his photo, the text says, “I found Gavon. He murdered someone, but he’s cute.”

It was later reported that he stopped replying to Amaya after finding out that she posted their messages on social media. He confirmed that they were never romantically involved.

For people who plan to partake in the trend, one user named Jessica from New York shared valuable tips.

“Keep it simple, talk about your interests. If you’re in school, talk about that. Ask ‘get to know you’ questions,” she said in a TikTok. “I wouldn’t ask them about their crime right away. Normally they are pretty open about it but you don’t want them to think that’s why you’re writing to them right away.”

In a separate video, she said, “’Never send them money. You have to be super safe about it… Also, if you’re getting a letter back from someone different, the initial person you wrote to likely sold your information, so be aware of that.”