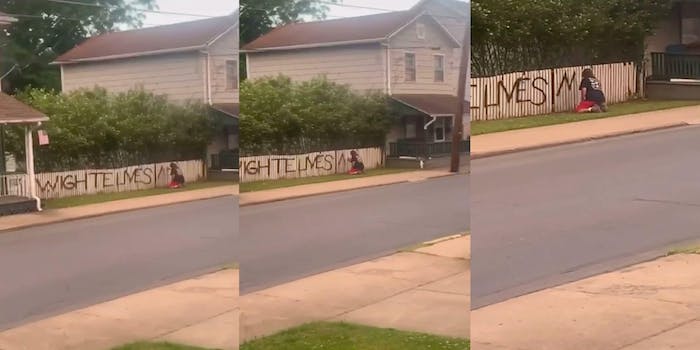 A man was caught on video attempting to spray-paint “White Lives Matter” on a fence, but he botched it.

In the video, the woman recording giggles as she watches him spell “white” as “wight.”

The video was captured by RaShawn Hicks in Sunbury, Pennsylvania, who uploaded the video to TikTok, garnering over 500,000 views.

“This can’t be real,” the woman recording says as he continues to spray paint.

“Get the f*ck out here,” one person says, calling the rest of their family to go outside and see the man’s mural. The spray-painter allegedly lives in the house of the fence he was tagging.

“The man lives in that house. He tried to fix his mistake on the fence,” Hicks told Jam Press. “but we let the idiot keep his awful grammar up.”

Later in the video, the man adds an E to “Wight” but that was not enough to salvage his failed attempt at counter activism. One viewer commented, “Maybe it will say Dwight Lives Matter – like from The Office?”

Other users thought he wrote “Wight Limes.” A commenter joked, “Finally! Someone is standing up for the white limes! This is a movement I can get behind.”

As the Black Lives Matter protests continue around the world, many counter-protesters are trying to rebut the movement with “All Lives Matter” sentiments. But, as made evident in this case, most of those attempts do not work out in their favor.