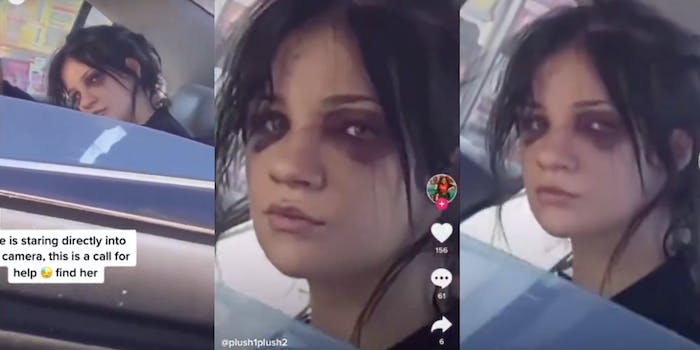 Authorities are investigating a TikTok video that might show Cassie Compton, an Arkansas girl who has been missing for six years.

The video, which was reportedly first uploaded to Facebook, shows a girl sitting in the backseat of a car in between two individuals. The girl has dark circles around both of her eyes. It appears to have been taken by someone outside of the vehicle, but all the individuals in the car seem to be aware that they are being filmed. The girl glares at the camera in an expressionless manner, while one of the individuals seated beside her seemingly sings into the camera.

A voiceover on the video uploaded to TikTok says, “She is staring directly into the camera. This is a call for help. Find her.”

Another voice adds, “I’ve seen this video come across my Facebook Story, and I keep wondering who is this girl? Where is she? Why does she look so lost? Why is her eyes do black? And why are people just laughing in the background? Clearly, she needs help.”

The TikTok video was then uploaded to Twitter, where users began speculating that the girl in the video is Compton. Compton went missing in 2014 at the age of 15.

No charges have been filed, and no suspects have been ruled out in her disappearance, according to the outlet.

KATV News reports that Tina Storz, a private investigator working to find Compton, believes the girl in the video could be her. Storz reportedly alerted local authorities and is trying to find out who first posted the video.

The Stuttgart Police Department told KATV News that it received dozens of calls about the video, and Chief Mark Duke said in a statement that Arkansas State Police is involved in the investigation into the content. “We have investigators working on this right now and can’t release any other information right now,” he said in the statement, according to KATV News.

The FBI’s Little Rock field office said in a statement to KATV News that it is likewise aware of the video and involved. “We are following up on the video and taking all investigative steps, but we cannot say anything further at this time,” the agency said.

While the majority of Twitter users believe the girl in the video is Compton, even leading her name to trend, some think the girl resembles another missing person: Haley Grace Phillips. Phillips’ family also reportedly believes the individual in the video is Phillips, not Compton.

Phillips’ father also reportedly “confirmed” that the individual is his daughter, who reportedly went missing in Los Angeles a few days ago.

Update 5:72pm CT, Jan. 14: A woman claiming to be Phillips is saying she is the person in the video. She posted an Instagram Story to prove she is “fine and not kidnapped” and said her eyes are bruised because she was robbed.

Update 9:00pm CT, Jan. 14: When reached for comment, the Stuttgart Police Department told the Daily Dot it is aware of Phillips’ claim and that “investigators having been working on it with the Arkansas State Police and FBI.”