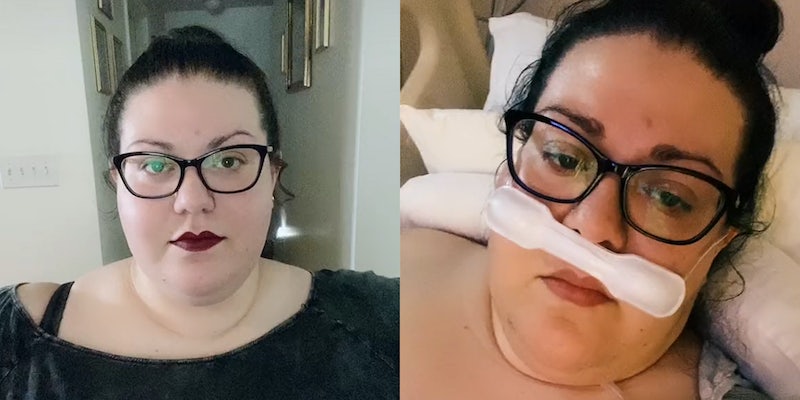 ‘All I’ve been hearing is the moans and screams of people in pain’: TikToker urges followers to get vaccine before dying of COVID

She made an appointment to get vaccinated just before getting sick.

Alexandra Blankenbiller, a TikToker and writer based in Florida, urged her TikTok followers to get vaccinated against the coronavirus shortly before she died of COVID-19.

On Aug. 13, Blankenbiller, who previously made lighthearted videos, posted a video of herself looking fearful in a hospital bed. Muffled screams can be heard in the background.

She continued posting from her hospital bed while attached to a ventilator.

“I don’t have a lot of energy for talking, so I’m going to try to make this quick,” Blankenbiller says in one video. “I did not get vaccinated. I’m not anti-vax; I was just trying to do my research. I was scared.”

She video responded to a comment that accused her of being a “kidney stone fear mongerer” with her experiences since being at the hospital with COVID.

“I’ve been here since early Friday morning and all I’ve been hearing is the moans and screams of people in pain,” Blankenbiller says.

On Aug. 24, just nine days after her final video was posted, Blankenbiller died.

Her friends, family, and 15,000 followers are mourning her death. Her sister, Rachel Blankenbiller, told WebMD, “Her final video really showed a lot of who she was. She was selfless—the type of person who used her final days to help others.”