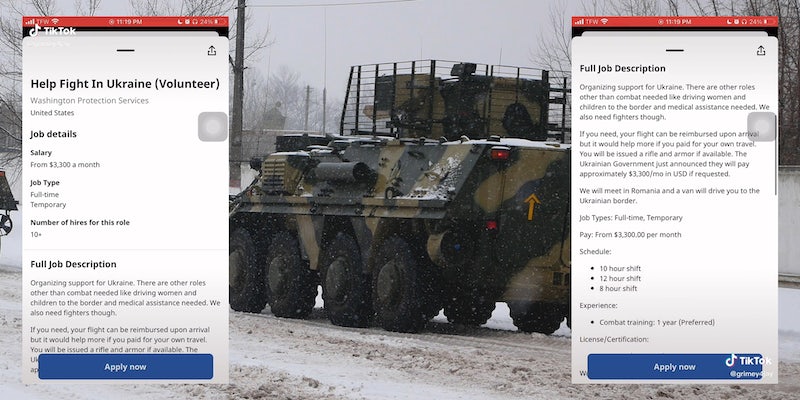 Indeed post claims volunteers will be paid $3,300 a month.

A TikTok user went viral after sharing a video this week purporting to show an online job listing for the war in Ukraine.

The user, known as @grimey4jay, alleged that a post on the job seeking website Indeed was looking for volunteers to help defend the country following Russia’s invasion.

The listing was reportedly uploaded by the company “Washington Protection Services” and offered potential recruits $3,300 a month in exchange for their assistance on the battlefield.

“Organizing support for Ukraine,” the listing says. “There are other roles other than combat needed like driving women and children to the border and medical assistance needed. We also need fighters though.”

Those who are hired for the position are reportedly required to travel to Romania where “a van will drive you to the Ukrainian border.”

The video, which is the only post on @grimey4jay’s account, has already been viewed more than 478,000 times.

Some users in the comments appeared to believe that the job posting was real, while others questioned its legitimacy.

“I seriously wanna go, I live in Canada how can I apply,” one commenter wrote.

The Daily Dot searched Indeed for the listing but was unable to locate any such post. After searching for the company “Washington Protection Services,” the Daily Dot found a company based in Washington state for hiring security guards.

The Daily Dot reached out to Washington Protection Services to inquire over whether it had any knowledge of the job listing but did not receive a reply by press time.

The video from @grimey4jay also indicates that the listing had just been posted moments before the recording began. The listing also claims to have been made by a user in Albany, Georgia. Examination of @grimey4jay’s Facebook account by the Daily Dot shows that the TikToker is also from Albany.

The Daily Dot sent @grimey4jay requests for comment over Twitter DM and Snapchat but did not hear back. Indeed similarly did not respond by press time after being asked by the Daily Dot whether it could confirm the legitimacy of the alleged post.

Given the wide spread of false information online amidst the conflict in Ukraine, users should always remain skeptical until verification can be made. The claim that Ukrainians were selling captured Russian tanks on eBay also spread across social media this week despite an investigation finding no evidence to support it.