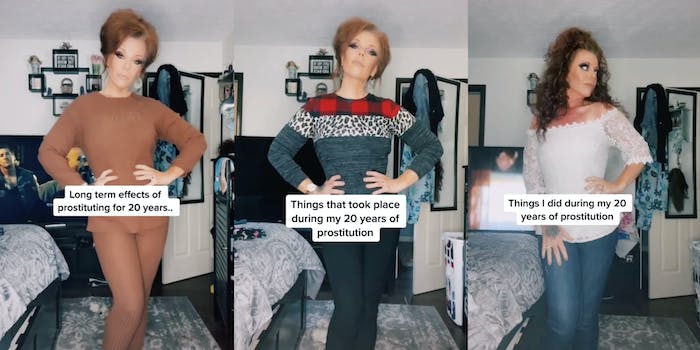 Her revelations have sparked important conversations.

A former sex worker is dividing TikTok over her harrowing tales of life in the business.

User @trashley_anonymous, who goes by Ashley Clark Huffman on the platform, has been lifting the veil on this oft-ignored career for months. Past shaming comments and tons of hate, her videos have shot to virality, with a recent upload hitting a whopping 13 million views.

Huffman’s most popular videos revolve around her years in sex work. According to her uploads, Huffman spent 20 years in the business. In an effort to better inform anyone looking to start their own career in sex work, she has been detailing the trauma she endured through two decades in the field.

Huffman’s most viral video breaks down the “long term effects” of 20 years in sex work. She lists several harrowing struggles including PTSD, night terrors, a lowered sex drive, and issues with affection. Other TikToks expand this list to additionally include addiction to “fast cash,” and disassociated feelings.

Huffman’s TikTok videos tell a distressing story, as she details her struggles with homelessness and meth addiction, as well as the times she was “kidnapped and beaten,” and the “countless rapes” she endured.

Huffman doesn’t sugar-coat her past. She details the good and bad of life as a sex worker, switching between recollections of making $1,000 in 30 minutes and dwelling on the many times she was abused by clients. She even digs into her own past misdeeds. According to one of her most recent TikToks, Huffman “robbed” a huge number of her clients, blackmailed married men, and once even “stabbed someone.”

She’s lived on the streets, served time in prison, and struggled for years to find happiness in her own skin, she said.

Thankfully, she’s doing much better these days. Huffman’s TikToks reveal that, after years of strife and struggle, she’s finally found her joy. She no longer makes her living through sex work, got divorced, and is in the process of getting custody of her kids. She also got off meth and married a woman. All of this has led to her thriving presence on TikTok, where viewers flock to ask questions, congratulate her, and judge her every decision.

Viewers are split on Huffman’s uploads. Hundreds of comments see people in awe of all she’s overcome, while others lean on arguments of “What did you expect?” to dismiss her experiences. Many people found themselves unimpressed by Huffman’s videos, informing her that “when you go against God there are always consequences.”

In fact, religion is used consistently as a weapon against Huffman in the comments, alongside those who prefer to shame her the old-fashioned way. By calling her names and blaming her for everything that happened in her past.

Thankfully, those voices are mostly drowned out by the wealth of positive feedback Huffman’s videos have earned. People have flooded her comments sections with words of support, love, and appreciation. Her stories have sparked a deep conversation about sex work: What it can look like, why people get into it, and what it can do to a person. People are celebrating Huffman for forcing the conversation to the forefront.

“I love you,” one commenter wrote. “Thank you for being an inspiration with your life experiences and being brave enough to talk about them on here. You are absolutely gorgeous.”

We reached out to Huffman and will update this article if she responds.