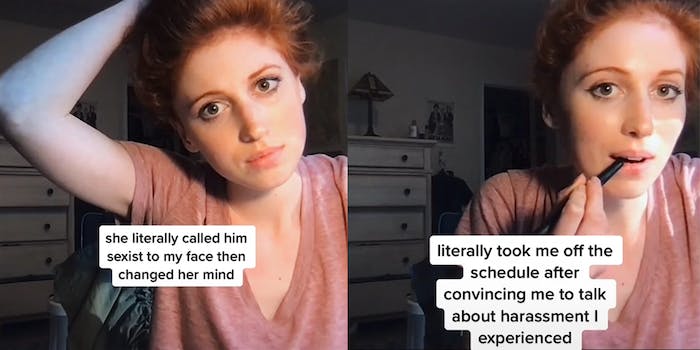 'This is really unprofessional.'

Starbucks employees have been some of the most outspoken workers on TikTok. Krista Webster, a former Starbucks employee, proved this to be true by uploading a video of a conversation she had with a “toxic” manager.

The video shows clips of a 26-minute phone call between Webster and her manager after she requested to talk about why her hours were reduced to zero. Her manager lists off reasons as to why she felt Webster wasn’t a good employee, saying she “didn’t respect” her manager’s time off and that she doesn’t “perform at her best before 9am.”

As Webster tries to defend herself, the manager brashly interjects and says, “I’m talking, Krista. I’m talking.” The manager continues to harshly critique Webster’s job performance as the video shows a disciplinary report that her manager apparently filed against her for “switching roles.”

Webster notes that she reported her manager after she was given the disciplinary report, which she insinuates resulted in her being fired the next week but that the official reason given for her termination was “being late.”

Webster is now on the receiving end of support, even from TikTok creators with large followings like Spencer Hunt—who has over 10 million followers and used to make videos about being a Starbucks barista. Hunt alleged he had the same manager as Webster and that she treated him so badly, which he said was the reason he transferred to a different location.

Another person said that the conversation should have happened during work hours and in the store. “This is really unprofessional, sorry you had to deal with that,” they added.

Update 5:21pm CT, July 22: In a statement to the Daily Dot, a Starbucks spokesperson said the company spoke with Webster and initiated an investigation into the incident.

“Krista’s experience is not one we want any partner to have and we will take appropriate action based on the findings of our investigation,” the statement said.

Update 2:55pm CT, July 22: A Starbucks spokesperson told the Daily Dot that company is actively looking into the matter.