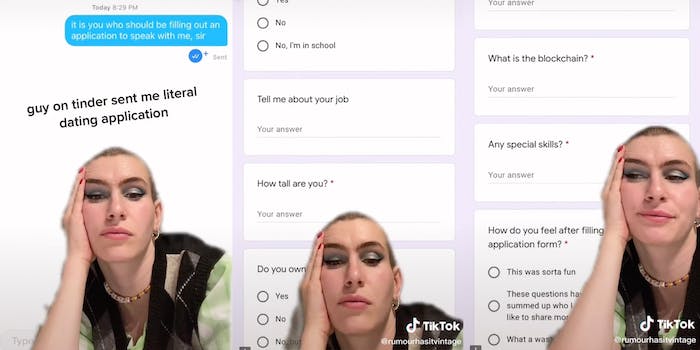 ‘I’ve seen these be cute/funny before and this was absolutely not that’: Man sends dating application to Tinder match in viral TikTok

A woman on TikTok says a man she matched with on Tinder sent her a dating application, and the video has viewers locked in a debate.

The TikToker (@RumourHasItVintage) shared a screenshot of her messages with the man, which showed the application link he sent her. Then she screen recorded the actual application, which included questions ranging from “Are you employed?” to “Which (Lord of the Rings) movie is (in your opinion) the best one?”

Other questions included “How tall are you?” and “What is the blockchain?”

The Tinder match also asked what movie or TV character the TikToker identified with most, adding that he would deduct 1,000 points if she said a character from Friends.

The TikToker rolled her eyes as she scrolled through the application. Her message response to the Tinder match said, “It is you who should be filling out an application to speak with me, sir.”

The video’s caption says, “I can’t make this up.”

By Thursday, the video had about 38,000 views on TikTok. Some viewers agreed with the creator that the application was distasteful, but a few said they were into it.

“I’ve seen these be cute/funny before and this was absolutely not that,” one viewer commented on the video. The creator wrote back, “I have never seen this before and never want to see it again,” with a laughing emoji.

Several viewers mentioned the Tinder match’s question about the blockchain, joking that he probably didn’t understand it and wanted her to explain.

“100% he’s just trying to find out what block chain is without having to admit he doesn’t know,” one viewer said.

“Not the block chain,” another viewer said with a crying emoji.

Some commenters said they appreciated the man’s effort, even if it was unconventional.

“Lol aww at least he put some kind of effort. Creative twist?” one TikToker wrote.

Another added, “I’d honestly love this.”

“I appreciate the effort,” someone else said.