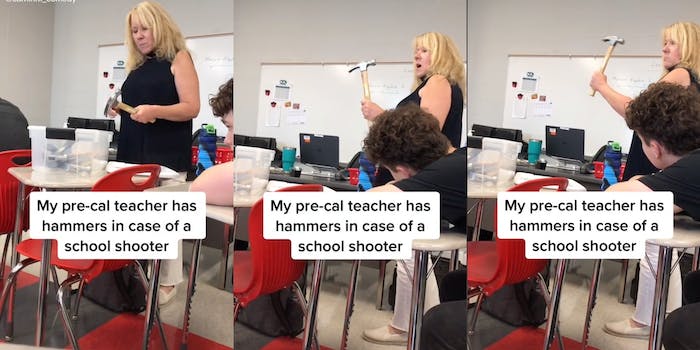 ‘At least she’s prepared’: Teacher arms students with hammers in case of shooter

'What if the shooter isn’t a nail?'

A viral video on TikTok shows a high school teacher preparing her students to arm themselves with hammers in the event of a school shooting.

The TikTok, posted by @caminiti_comedy, has viewers divided on whether arming teenagers with hammers is an appropriate course of action in such a situation. The video has received almost 3 million views and over 500,000 comments debating the question since it was posted on Thursday.

In 2021, there were at least 43 incidents of gunfire on school grounds, resulting in 12 deaths and 19 injuries nationally, according to Everytown for Gun Safety. Apparently teachers are looking for less conventional ways to protect their students.

In the video, the teacher says, “If you’re willing, grab a hammer” as she grabs a hammer out of a plastic bin.

She went on to say that she tries to buy a few hammers every year, presumably for this purpose. Waving a hammer around slowly, she added, “They’re not gonna leave here happy.”

“Lol I mean at least she’s prepared some teachers just have us line up in the back of the class and call it ‘hiding,’” one viewer commented.

In a second TikTok, the teacher clarifies that she prefers hammers with a straight claw but that someone bought her hammers with a curved claw, “which was really sweet.”

Then she makes sure the students understood to hit any attackers with the claw, or the hooked end, not with the face or the end that’s used for hammering nails.

“Hit ‘em in the eyes, OK, in the ears,” the teacher instructs. “Places that’s gonna hurt.”

Although receiving the back end of a hammer to the eyes or ears would almost certainly hurt, some viewers weren’t convinced that a hammer would really help much in an active shooter situation.

“Hammer vs semi-automatic… wonder who will win,” one viewer wrote. Someone else asked, “What if the shooter isn’t a nail?”

“What if the shooter has a hammer too???” a different user cracked. The creator cracked back, “Go back and get another hammer.”