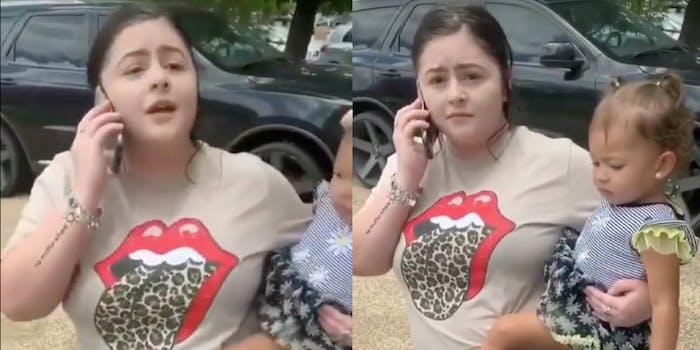 TikTok shows woman being racist while holding her Black child

A TikTok showing a white woman threatening a Black woman and saying the N-word while holding her Black child is going viral, and viewers are furious.

The woman in the video is on the phone and fighting with her child’s father and grandmother, apparently at their home.

“I will have people come up here and get you killed so don’t try me,” the woman says. She continues to threaten the father and grandmother and call them the “N-words” while holding her Black child.

Viewers are calling out the woman for her racism and even calling for Child Protective Services (CPS) to get involved.

“You can still be racist & have black kids. Exhibit A … Notice when she said n*ggers she looked at her BLACK baby. somebody pls take this child from her,” one viewer, @melaninpurp, tweeted, along with the video.

@melaninpurp posted a second video of the altercation, in which the woman went off on her baby’s father.

“Bitch I will whoop your mother*cking ass you [N-word] b*tch,” she says.

The woman also says a variety of other racist slurs to her baby’s father and his mother, including “bye monkey, go put your wig on.”

At one point the child’s apparent grandmother says, “You can call me all the [N-words] in the world, you’re daughter is half of it.”

Viewers are pointing out that some white women fetishize Black men and Black culture, and have mixed-race children while still being racist against their child’s own race.

“How you have/want a black baby but you don’t even respect black people??” @melaninpurp tweeted.

“These people like to dab their feet in black culture when it suits them. The hypocrisy and irony is this: they want black culture but not black people,” another user tweeted.

“I hope he takes this to court. This is more than enough to get that baby taken!” one user tweeted. “That baby doesn’t deserve a mother who hates her skin when a world full of people are already praying on her downfall.”

Twitter user @melaninpurp updated her followers and said CPS did get involved and is conducting a welfare check on the child.

The baby’s father started a GoFundMe to try and gain custody of his daughter.

“You should not fear for your own child’s safety because of their own mother’s hate,” he wrote. “You should never have to witness your kid or kids being used as pawns or protection. … Anything that anyone is willing to donate to help gain custody for Elliana would be the most appreciative in this time of concern for her. I love my daughter.”