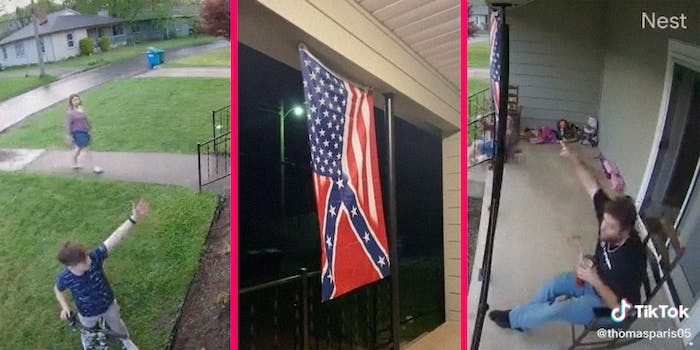 'How is that adult not embarrassed?'

A young boy proved that wisdom and age don’t always correlate after he confronted a grown adult about the Confederate flag flying on his property.

TikTok user @thomasparis05 posted security camera footage from the conversation that took place outside of his house.

In the video, a boy on a bike rides up to the TikToker’s porch and points to the flag he has hanging up, asking the man something drowned out by the sound of a nearby train. The boy looks ready to leave after receiving his answer, but the man calls him back, defending his flag as “American.”

“Uh, no, it’s a goddamned racist flag,” the kid seems to say.

The adult argues with him, and the boy responds that he’s “not stupid” and that he knows what he’s looking at.

“Do your research before you come to me and sound like a fucking retard,” the man says. “You’re the one coming me telling me to remove a flag. It’s a freedom to fly that flag.”

“It’s so damn racist,” the kid shouts back, turning his bike to leave.

After the man tells him to “do your research,” the boy gets one last jab in. “Maybe you should!” he yells.

Though @thomasparis05 initially posted this video to his account to show how proud he was of arguing with a child, his entire TikTok account has since disappeared.

A redditor reposted a subsequent video showing a better angle of the flag, which appears to just be a simple American flag in the security camera footage but is actually a hybrid of both the American and Confederate flags.

After dunking the man for both claiming the Confederate flag isn’t racist and hanging a monstrous meld of it with the real flag of the United States, commenters on Reddit praised the boy for holding his ground.

“Props to him for saying something,” wrote u/western_red. “Most adults…just wouldn’t have the balls.”

“Kept his cool, only responded to insults instead of throwing them. How is that adult not embarrassed to fuck right now?” asked u/jApollo93.

That seems to be the mind-boggling question most viewers had. At the end of the day, the most absurd bit is how the video was originally uploaded by the man with the flag.

“That means he thought he had some internet gold calling a kid a fucking retard,” u/HeavyKnees63 said.

“I just went to his TikTok page…and he’s still arguing with children on the internet that the flag isn’t racist,” u/clevercalamity said prior to @thomasparis05’s videos disappearing.

It’s hard to be right when arguing with a literal child—especially when it comes to defending the Confederacy.