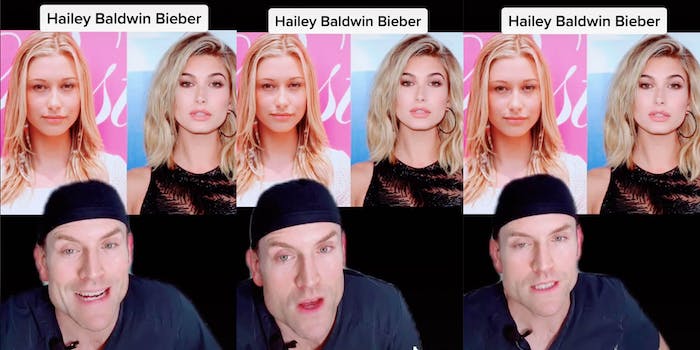 Now the Biebers are threatening to sue.

Dr. Daniel Barrett, a plastic surgeon who’s popular on TikTok, is facing threat of a lawsuit from Hailey Bieber after suggesting she got work done.

Hailey and Justin Bieber’s lawyers sent the surgeon a cease-and-desist letter claiming he used her likeness without her permission and spread “uncorroborated claims that Mrs. Bieber has undergone plastic surgery.”

Barrett was also accused of copyright infringement for using the lyrics to Justin Bieber’s song “Sorry” in the captions.

Barett compared two photos of Hailey Bieber, one from 2011 and another from 2016, to try and debunk an Instagram where she claimed that she has never gotten plastic surgery. Barrett said there was no way her nose could have transformed the way it did without the help of a plastic surgeon.

Barrett said that she may have gotten work done on her nose based on the position of her nose and the size of the tip of her nose. He also suggested that she has gotten multiple surgeries, with the most noticeable being a genioplasty and lip fillers.

The legal team representing the Biebers said the video contained multiple violations, including slander and violation of rights of privacy. Despite the couple’s demands, Barrett has neither removed the video nor issued a public retraction.

The doctor told E! News that his videos are to “educate people about plastic surgery” and that it’s “crazy” for the celebrities to threaten a lawsuit.

“The purpose of the video was not to disparage Hailey Bieber in any way, the purpose of my video was to share my opinion about the procedures that I believed she may have had done based on photos alone,” Barrett said. “This is at the request of many of my viewers who follow me for this type of information and for my opinion.”