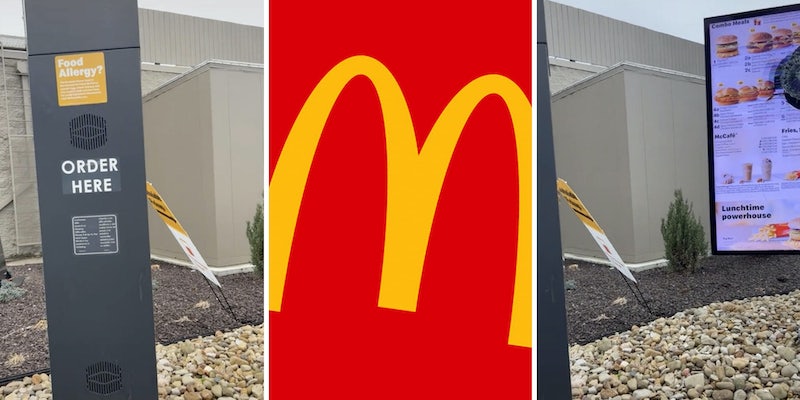 ‘Who would do such a McThing?’

A viral TikTok exposed the aftermath of an alleged rock-throwing incident at a McDonald’s drive-thru location.

The TikTok posted today by user @xylander11 has over 172,400 views. The video reveals a McDonalds drive-thru screen shattered, appearing to be the result of an object hitting the screen.

“Hey, what happened to your screen?” the person filming the video asked as they pulled up to the drive-thru.

“Somebody threw a rock at it. They were McMad,” the drive-thru employee replied.

McDonald’s is an international fast food chain with over 13,500 locations in the United States. The creator of the video commented that the location of the McDonald’s where the alleged rock-throwing incident took place is in Pittsburgh, Pennsylvania.

The Daily Dot could not find reports online of a recent rock-throwing attack in Pittsburgh. However, last week a man allegedly smashed a McDonald’s screen with a rock after being denied free food 4 hours away from Pittsburgh in Schuylkill County, Pennsylvania, according to Fox 56.

Users in the comments section of the viral TikTok were amused by the drive-thru employee’s “McMad” response.

“Where did they get the McRock,” one user joked.

“Who would do such a McThing?” another replied.

Some viewers felt bad for the employee.

“How to ppl get so worked up in fast food places?,” one user asked.

“She deserves a raise,” another commented.

This is not the first rock-throwing incident at a McDonald’s drive-thru.

According to a survey conducted by UCLA’s Labor Center, 50% of fast-food workers surveyed said they had experienced verbal abuse, and over 33% experienced violence such as threats, racial slurs, and assault.

The Daily Dot reached out to McDonald’s via email and user @xylander11 via comment on TikTok.