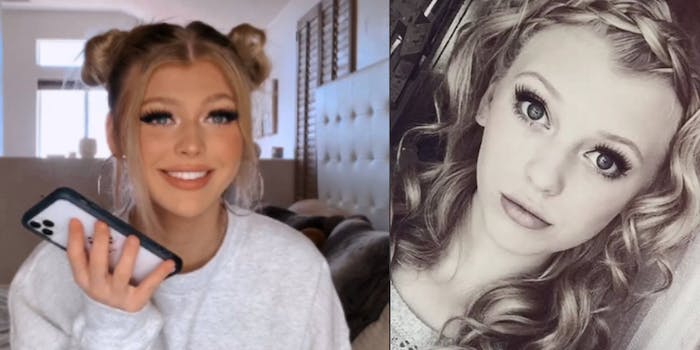 She was pressured into sharing her story after someone else threatened to make it public.

TikTok star Loren Gray has opened up about being sexually assaulted when she was 12.

According to a Twitter post, Gray was recently informed that someone online knew she had been assaulted when she was younger and was threatening to expose that information publicly. The message prompted Gray to get ahead of things and share her experience herself.

“It’s been really difficult for me to share this part of my life in such a way,” she wrote. “I received a message that somehow someone knew. But I know how fast word travels and I wanted to be the one to tell my story.”

Gray first opened up on TikTok, sharing photos of herself at age 12 alongside a heartbreaking note:

“At this time I had my innocence stolen from me in the basement of someone I trusted,” she wrote. “I only told one person and to this day she remains my best friend. We cried in my bathroom together for hours. It took two months for me to tell my parents.”

“I felt dirty, hopeless, broken, and worthless. I was confused and scared. I felt like it was my fault,” she added.

Gray’s recollection of how the experience effected her is a common refrain among victims of sexual assault, but she credits making TikTok videos and connecting with fans for helping pull her out of the dark place she was in.

“I was homeschooled, and began making videos to pass the time and ease some of the loneliness and isolation I had felt. People were watching my videos and although I was still struggling, I felt like I had finally found people who cared, regardless of my situation,” she said.

“I’m 18 now, and I’ve realized that my past does not define me. It was never my fault, and I never deserved it.”

Gray’s follow-up on Twitter expanded on some of the same sentiments.

“When I say you give me purpose and helped me through the darkest times in my life, I mean it from the bottom of my heart,” she said.

Fans quickly flocked to support the TikTok star after she opened up.

“Shatters my heart that you felt pressured to do this, but I hope you know how many people you have helped today & everyday,” wrote @OKOKLEI.

And quite a few shared how she had inspired and helped them with their own struggles, as well.

“As someone who was sexually assaulted myself coming out and saying something like this is so hard and I am so proud of her,” shared @sftyoorim.

And that, Gray said, is part of why she wanted to make sure she was the one who told her story, rather than having somebody else tell it for her.

“I hope that this can shed some light on the gravity of sexual assault, and provide some hope for anyone who can relate,” she wrote. “Love you all so much.”