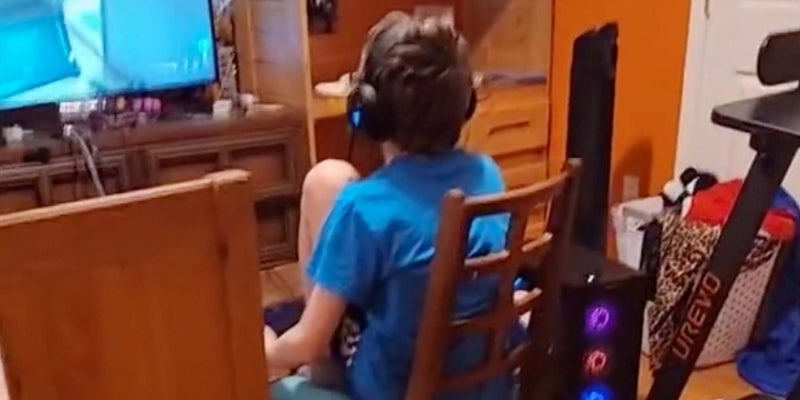 'You realize that means I automatically don't like you.'

In a video posted on Thursday, a TikToker’s 12-year-old brother reprimands his friends for being homophobic while playing a video game with them.

“So you just blatantly admit to being homophobic?” the boy says into his headset. “You realize that means I automatically don’t like you, because that’s really fucked up.”

He checks to see if his friends are joking, and then tells them his sister, @bumblebee__ is a lesbian.

“She’s gay and you blatantly said you don’t support gay people,” he says to his friends in the headset in a follow-up video. He also says that the acronym LGBT stands for “more than just gay” and that not all trans people are gay.

“I genuinely do care, and I want to have this argument,” he tells his friends. His sister captioned the follow up video “that’s my boy.”

In a Zoom interview with the Daily Dot, @bumblebee__ said they were really proud of their brother when they overheard him defending LGBTQ people to his friends.

They said that they talk with their brother regularly about LGBTQ rights and the Black Lives Matter movement.

“It was really nice knowing that he listens,” they told the Daily Dot.

Their little brother said the conversation with his friend didn’t end well, and that they were “both pissed off.”

“I was used to like getting maybe like 40 views max,” the TikToker said. “And then my phone just went off. It just kept going.”

Although commenters have suggested that @bumblebee__ raise money to buy their little brother a new gaming chair, they’ve decided to put the attention they’re getting toward charity: They set up a CashApp account and will be donating funds to The Trevor Project and For Fox Sake, an LGBTQ-run wildlife rescue organization.