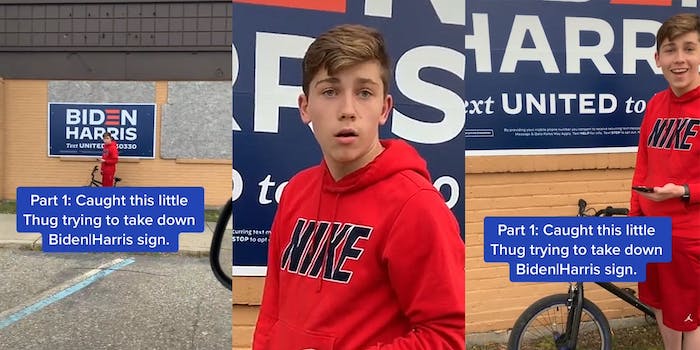 Others are heralding her as a hero.

Update 11:15am CT, Nov. 13: This story has been updated with quotes from the owner of the @sweetnisey TikTok account.

Post-election TikTok beef is the gift that keeps on giving.

Today’s installment features a viral altercation between TikToker @sweetnisey and a boy who is, at most, a teenager. The interaction, posted to TikTok over the last six days in five segments (the second of which is missing), shows @sweetnisey confronting the boy as he prepares to take a Biden-Harris sign off the wall of a local business in Pontiac, Michigan.

“What are you doing?” @sweetnisey asks the boy in the first video, which has accumulated 4.1 million views.

“So, why don’t you leave the sign down?” @sweetnisey asks, cutting the boy off. “Do you even live in this city?” (He does not.)

When asked if he is a Trump supporter, the boy says, “Don’t worry about it.”

“I am gonna worry about it. How ‘bout you leave the sign alone? You don’t live here. Go.”

The follow-up videos show @sweetnisey peppering the boy with more questions as he tries fruitlessly to reason his way out of the confrontation. He asks how she knows he didn’t put the Biden-Harris sign up himself, to which she replies, “Honey, you wouldn’t be trying to take it down if you put it up.”

The boy’s attempts to get smug with @sweetnisey fail spectacularly. After she says she won’t let him take the sign down, he asks, “What, are you gonna assault me?”

“No, I’m not gonna assault you, honey,” she responds. “I’m calling the police.”

“Do it,” the boy tells her. But when @sweetnisey encourages him to take the sign down so she can have something to show the cops, he changes his tune.

“No, I’ll sit here. I want you to call the cops before I take it down.”

“Honey, what would make sense to call the police before you take it down?” she asks bemusedly. “You gotta commit a crime, honey, in order for the police to be called.”

Another video shows the sign on the ground as the boy had already loosened most of the screws. He tells @sweetnisey that he’s “cleaning up the property,” even though he makes no effort to pick up the sign, and he has no garbage bags because he “ran out.” Still, @sweetnisey refuses to let him off the hook.

At the mention of his mom, the boy hops on his bike and high-tails it from the business, leaving the Biden-Harris sign to languish on the sidewalk.

Comments on the TikToks—which together have earned nearly 7 million views—were split. Some people accused @sweetnisey of being a “Karen” for giving the kid such a hard time. Others applauded her as a hero who rightfully put the kid in his place. Plenty made fun of the boy’s matching red shorts and Nike sweatshirt and socks-and-sliders combo, the quintessential middle school ‘fit.

The negative comments don’t appear to have taken a toll on @sweetnisey yet. Since sharing her run-in with the would-be sign assailant, she has posted several follow-up videos in which she roasts individual commenters directly. Her TikTok bio also pokes fun at the criticism: “The only Karen you want in your life.”

“As far as negative feedback, I laugh and let it roll off my shoulders,” @sweetnisey—who declined to provide her name out of privacy concerns—tells the Daily Dot. “Most of these keyboard warriors wouldn’t have the balls to say it to my face. Most of them hide their profiles or have no content. So why let them ruin my day?

“When it comes to positive feedback, it makes me feel good that others understand what I was doing,” she continues. “Tiktok is an app where you can build and be yourself. If people think I’m the Karen they love, then I’m happy because I don’t mind being that. Being called Karen by haters is laughable. I know who I am, and I always speak up when I see something wrong.”