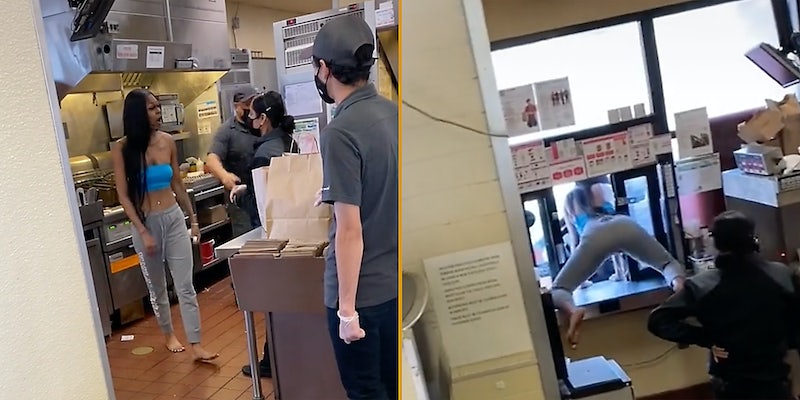 ‘This is really sad & embarrassing’: Woman climbs through Jack in the Box drive-thru window, twerks at employees in viral TikTok

'Why people no longer want to work in fast food.'

While the woman is interacting with employees, one of them brings her an item. She heads back to her car—through the drive-thru window—and twerks. TikToker King Avi (@k1ngavi), who posted the video, laughs and says, “Twerk for me!” He also said that the woman yelled at the employees to give her ranch dressing.

By Tuesday, King Avi’s video had been viewed almost 390,000 times and had over 50,000 likes. The TikToker promised a part 2 of the video but at the time of publishing had not published a follow-up.

Commenters on King Avi’s video had an array of reactions: Some thought it was funny, while others worried for the woman.

User @dasianicole_ said that the video was not “[even] funny.”

Others felt for the employees shown dealing with the situation.

“And this is the main reason why people no longer want to work in fast food restaurants,” @nonaa1125 wrote.

“It ain’t even [cool] at all,” @rosiefay691 wrote. “U got to understand that fast food places are short staff so most of the orders will take a bit longer.”

“They don’t get paid enough to deal with this,” @littlerascial commented.

The Daily Dot has reached out to King Avi via Instagram direct message and to Jack in the Box via Twitter.