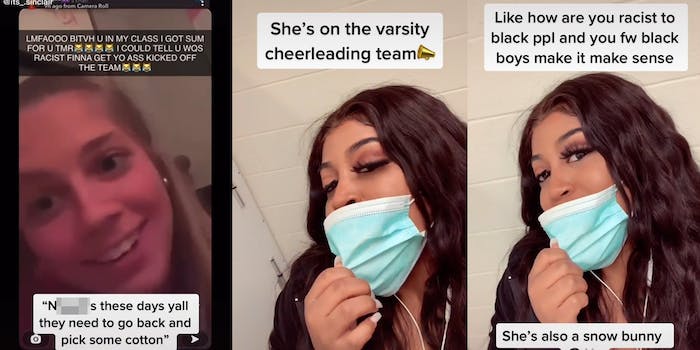 Racist comments from a student at a Georgia high school have her peers calling her out and parents of other students expressing their disappointment.

One short clip features a white female student telling the camera, “[N-words] these days, y’all, they need to go back and pick some cotton.” She then turns to a friend off-screen and tells them, “Do not post that. They would chop my fucking head off.”

Her request went unheeded, and the resulting backlash has left the school scrambling to reassure everyone that “racism has no place in our school”—while also trying to discourage irate social media users from putting pressure on officials.

“Please know that we are aware of these videos, are investigating, and will take the sternest action authorized by law against anyone who engages in disrupting our school,” read a statement from Principal Keith Chaney.

But Mountain View students aren’t waiting around for the school to do something.

TikToker @its_.sinclair, who says she also attends Mountain View, reposted part of one of the original videos to her own account along with the alleged social media handles of both the student and her parents. She identifies the student as a Mountain View varsity cheerleader.

“You cannot say racist stuff like that in 2021. You just can’t, baby,” the TikToker says. “It’s not the 1900s anymore, I’m sorry. Say bye-bye to college and future jobs ‘cause baby, you just ruined your life.

The TikToker asserts that the girl knew what she said was wrong: “That’s why she didn’t want the video to be posted, but she said it anyway,” she says.

Parents have also expressed frustration and disappointment in what transpired, as well as the principal’s response to the matter so far.

“To me, it sounds reactive,” Kamisha Hayes, a parent of a Mountain View student, told WAGA-TV. “The email said they’d address it… but more so that email is in reaction to student retaliation.”

She also said that her own daughter felt “validated” after hearing the racist comments go viral because she had been telling Hayes for years that racism within her school district was an issue that needed addressing.

“If I had a message for them it’d be don’t be sorry that you got caught,” Hayes said. “Be sorry and have a change of heart so we can all have inclusion.”

Two other students were also allegedly involved in the videos, with at least one of the others also using a racist slur while on camera. WGCL-TV reports that other students said the girls involved have withdrawn from the school.