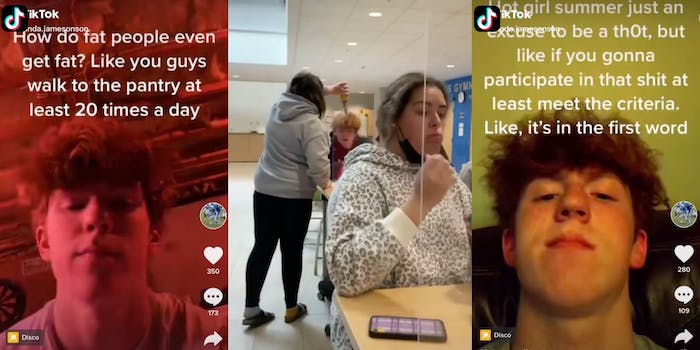 'Cannot even describe the amount of serotonin I just got from seeing this.'

People are praising a high school student who was allegedly suspended after standing up to a classmate who was making offensive comments on TikTok.

A TikTok user, a sophomore named Luke, posted videos to his channel mocking girls for being overweight or “ugly” and promoting rape culture. The videos have since been deleted.

“I know damn well that more than 3% of female are either fat or ugly,” he wrote over an image of his own face, seemingly in reference to a study released in March concluding that 97% of women in the U.K. between the ages of 18 to 24 have experienced sexual harassment.

Luke’s comments disgusted some of his fellow students, and one decided to provide her response in real life rather than in the comments section.

A compilation TikTok posted by another user, Amanda, features clips from several of Luke’s posts. The video also shows a student identified as Delaney pouring what appears to be chocolate milk onto Luke’s head in a high school cafeteria.

A Snapchat screenshot from another classmate says Delaney was “out here doing gods work” and calls to “free delaney.”

Commenters on the video are almost unanimously taking Delaney’s side for retaliating against Luke and his misogynistic comments.

“I love her for that, she didn’t do anything wrong,” user @genesisibarra88 proclaimed. Another user said he “cannot even describe the amount of serotonin I just got from seeing this.”

Many of the comments highlighted Luke’s dismissiveness of rape culture.

“If he didn’t want stuff dumped on him he shouldn’t dress like that,” one TikToker snarked.

“His head was exposed meaning he was asking for it,” @stinkyasher agreed. “His fault not hers at all.”

The final screenshot of the original video implies that Delaney was suspended for the incident. Amanda posted a follow-up video showing emails to the school principal from irate TikTok users who say Luke wasn’t punished.

Luke, meanwhile, deleted all of his previous TikToks and uploaded a single apology video.

“To anyone offended by my videos, those were meant to be jokes between me and my friends,” he wrote. “I’m sorry to anyone who was offended. Those posts were not aimed at anyone specific and don’t reflect how my parents raised me.”

But commenters weren’t buying it. “Who’s going to college???” one user asked. “Not u.”