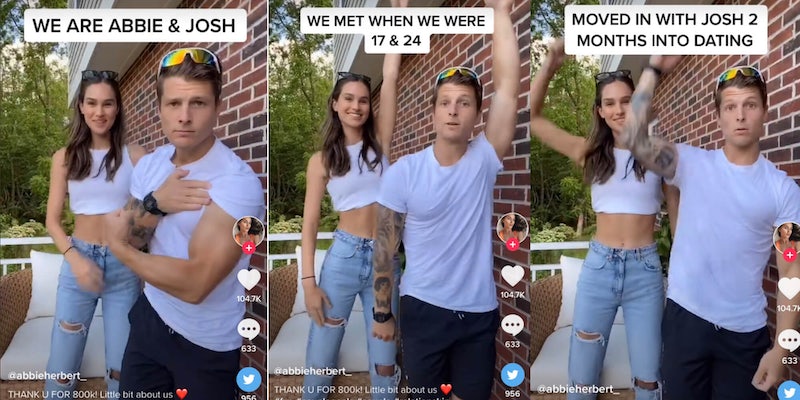 ‘This is called grooming’: Famous TikTok couple scrutinized after revealing ages they met

A famous TikTok couple is receiving some major scrutiny after the two revealed they met when the woman was only 17, and the man was 24.

Twitter, of course, wasn’t haven’t it and is accusing the man of grooming.

The couple—Abbie and Josh Herbert—has become famous on TikTok and Instagram for posting vlogs, beauty tips, personal stories, and music. (Josh is a singer, while Abbie, who has more than 57,000 Instagram followers, appears to be a model and influencer.)

Recently, however, Abbie posted a video describing how she met Josh. She claims this is her “most asked question.”

In the video, Abbie says she met Josh in 2013 on the set for one of his music videos. As the years went on, she continues, they stayed in touch.

But, Abbie divulges, she was only 17 years old when she met Josh, who was seven years her senior.

Abbie then goes on to say that they didn’t go on their first date until two years later, in 2015.

Of course, waiting until she’s legal then might seem legit at first—but, in her video, Abbie shares a screenshot of a tweet Josh wrote in 2014 alleging Abbie would be “the last gf in my life..” accompanied by a wedding ring and bride emoji. And in an old photo of them hugging, she allegedly captioned it on Instagram in 2016, “So happy he stalked me for 3 years after this was taken.” The photo has since been deleted.

It wasn’t long before users noted that the dates and years weren’t adding up.

The couple says they moved in just two months after officially dating and tied the knot in 2019—when she was 22, and he was 29.

Some Twitter users weren’t OK with the details of this love story.

The couple is also being criticized on TikTok in others’ videos and was receiving negative comments under their own TikTok videos.

To be clear, this isn’t the first time the couple has shared details about their age difference. In one TikTok, Abbie gringes in a video captioned, “When you realize your husband was a freshman in college when you were in 5th grade!!!!!”

But some users are coming to the couple’s defense saying age is just a number and that the two are clearly in love.