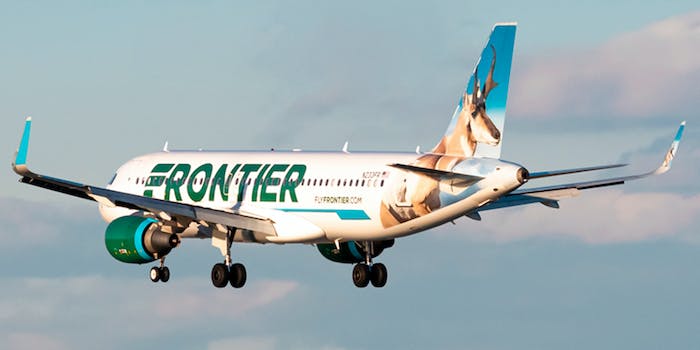 ‘That’s gonna be an expensive Uber’: A woman reportedly flew to Philadelphia on Frontier Airlines to save money. She landed in a completely different state

'OMG that happened to me.'

In a viral TikTok, a woman says she took a Frontier Airlines flight to Philadelphia and ended up landing in Trenton, New Jersey.

Anna (@anna_not_hanna) posted the clip of herself on July 1. The text overlay reads, “Guys I love being poor. I flew frontier to Philly to try to save some money and they landed us in Trenton, New Jersey… Mans behind me said “close enough” and I really felt that.”

The video has over 1.1 million views as of Tuesday.

For those who don’t know, Trenton to Philadelphia is about a 45-minute drive. Frontier Airlines is a lower-cost airline that offers cheap rates but lacks extra perks like seat selection.

It’s unclear how the mix-up happened, but commenters shared similar experiences with Frontier and other budget airlines.

One user said, “Omg that happened to me. Was going to Detroit and they dropped us off in Toledo.”

“Spirit flight to Chicago dropped me off in Detroit at 2am,” another wrote.

“Haha same. Was going to Orlando but ended up in Atlanta,” commented a third.

“That’s gonna be an expensive Uber if your car is in Philly,” commented another.

“When you book you need to make sure. I almost booked a Philly instead of Trenton. Key words Philly area (ttn),” another person explained. Essentially, it’s like looking for a flight landing in the greater city area rather than at a specific airport. It is currently unclear if this is what happened to the TikToker.

The Daily Dot has reached out to Anna via TikTok comment and Frontier Airlines via email.