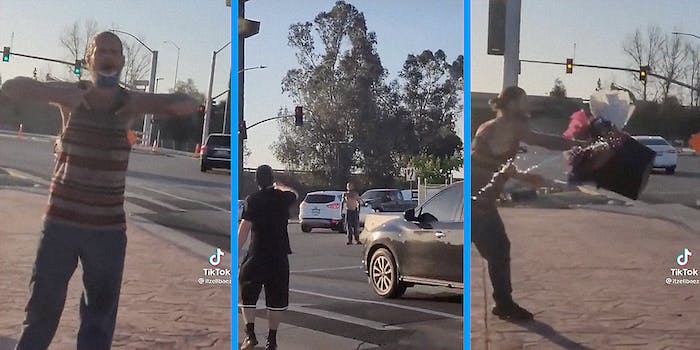 A family recorded the incident and pulled over to help.

Viral TikToks show a flower vendor coming under attack while selling his wares by the side of the road in Bakersfield, California, earlier this week.

The clips show another man, who was reportedly panhandling in the same area, antagonizing Felicitó Chávez and throwing a bucket of his flowers into the road.

A family driving by sees what was going on and turns their car around to come back and help him.

“That’s enough! You’re not going to be doing this just because you want money,” Miriam Cuario tells the man as she records the altercation. “He is working. You’re asking for money.”

The offending man strips off his shirt and takes an aggressive stance as others, including Cuario’s husband Gabriel Baez stop to join in defending Chávez from the man and pick up his bucket of flowers from the street. Cuario yells in Spanish and English. “Por que?” she yells at the beginning of one clip.

They run him off to another street corner in one of the clips, but Baez told KGET-TV that the man kept returning to cause trouble.

Eventually, the family calls the police and gets back into their car to circle the area and keep an eye out for the panhandler. In a later video, Chávez shows a large bruise on his chest that he says was a result of the man’s attack. He also says his personal belongings were stolen while he was trying to sell flowers to passersby.

Cuario told some commenters that the police never showed up. Baez reportedly later told KGET-TV that police arrived—but they were too late to help.

“Due to the area where the unit was responding from and traffic, it took that unit 11 minutes to arrive in the area,” a representative from the Bakersfield Police Department told the news station. “That unit circulated the area for 42 minutes, trying to locate any involved persons. We strongly urge the victim to contact us.”

The TikToks have gone viral, and viewers repeatedly thanked the family for stepping in to defend Chávez.

“Thank you for helping out the vendor!” one user wrote. “Tears in my eyes cause Hispanics are here to work and tryin to feed their families!”

“All it takes is one person stepping up and the rest come!” another said.

The family has started a GoFundMe to help Chávez out following the incident. By Thursday, the fundraiser had raised over $6,900, far exceeding its $2,000 goal.

Viewers were outraged early this week after a video showed an attack against an elderly Asian woman in which multiple people passed by without stopping to help.