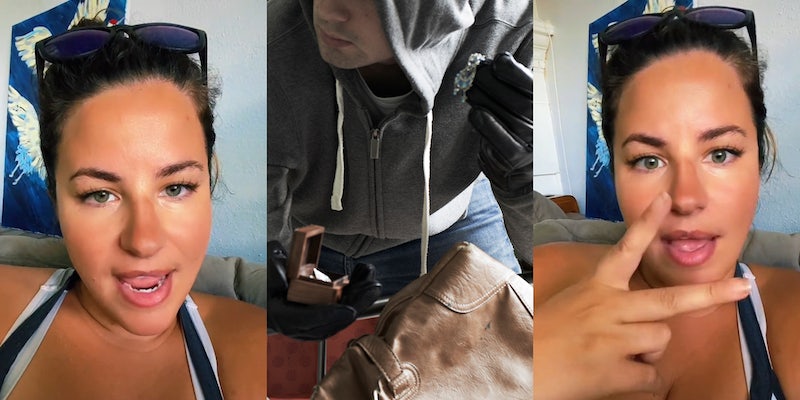 Dating app disaster: Florida man ghosts woman at 2 in the morning. She then discovers that he burglarized her house

A woman on TikTok says her neighbor was robbed by a man she was seeing who ghosted her at 2 a.m.

The TikToker, named Ja (@youmeandthetea), shared a lengthy, two-part storytime about the incident. The two videos received more than 100,000 views as of Thursday.

The neighbor had met the man, who said he was from Florida, on a dating app, and the two had been talking online for several months. Eventually, the man came to visit the neighbor, who lives in a different part of Florida, Ja says.

The first night the man was visiting, he and the neighbor went out to a restaurant. The TikToker says the man was “super charming” during the date, and her neighbor may have spent the night with him at a hotel. The next day, the neighbor takes the man to the lake on her boat, and they drink throughout the day. Despite previously saying she wasn’t comfortable bringing the man home yet, the neighbor ends up inviting him over to enjoy her backyard pool.

“I think that maybe she just let her guard down,” Ja says. “Maybe also she just got good vibes so she brings him home.”

After spending the evening at the pool, the man slept over with Ja’s neighbor. The neighbor wakes up at 2 a.m. and realizes the man isn’t in her bed. The front door of her house was wide open, and the man was gone. He also stole the neighbor’s late mother’s diamond ring off her finger, designer purses from her closet, and some other items from her daughter’s closet, Ja says.

The neighbor filed a police report and asked Ja for footage from her home security videos. However, the security footage was “super grainy,” so the TikToker says she doesn’t know if it can be used to confirm anything.

Basically, the man gave Ja’s neighbor a fake name, the TikToker says. However, the fake name was close enough to the man’s real name that the neighbor was able to find the man in Arizona by digging around online.

“In Arizona, he has a rap sheet like a mile long of basically conning people,” Ja says in the second video. “He’s a straight-up con artist, and this is just like what he does. This is how he makes his living.”

The TikToker says she doesn’t think the police have located the man yet. Her neighbor still lives across the street from her but is planning to move.

Viewers were baffled by the story, but some urged Ja to post photos of the man online.

“Ask her for a pic and post that everywhere. It’s scary being single wanting to meet a nice man,” one viewer commented.

A third viewer commented, “Ask her for permission to release pictures of him. The same thing happened to me and I swear to God I tell people it’s like dirty John! This hits hard.”

In reply to one of the comments, Ja wrote that she wasn’t sure if her neighbor would share a picture of the man but that she’d be sure to ask her for one.