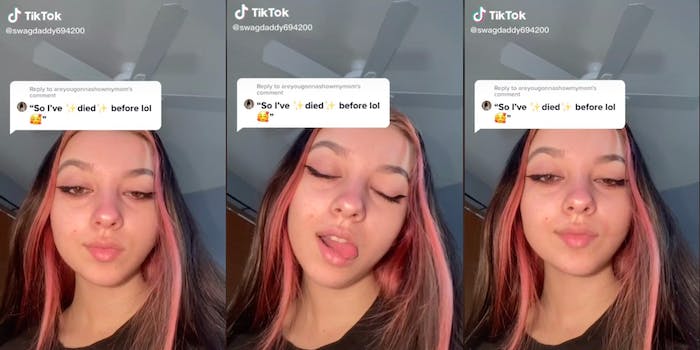 A TikTok creator says that she died and come back to life, and she describes the experience in a series of videos as “returning back to the source,” Pedestrian reports.

Liliana, whose TikTok user name is @swagdaddy694200, reacted to a video of another content creator describing what it feels like to die. In the video, she says, “you lose desires, but you still be thinking a little bit.” She says her sight went first, she had her touch for a while, and she could still hear.

“You leave your body, but it’s not like a hovering over everyone watching the situation,” she says. “It’s like you become another being.”

In a Google Document, she wrote that her experience with death happened when she smoked marijuana for the first time in 2018. “I took one hit and then started losing brain cognitive functions,” Liliana wrote. “I couldn’t focus or sit upright and then my friend offers me water and i said ‘what’s water’ and then passed out on the floor.”

She wrote that she did not see her life flash before her eyes. “There’s no images it’s kind of like a trip simulation and there’s a lot of spinning and some shapes,” she wrote. “It was really scary but towards the end like the tunnel thing in the video that was the energy source and you become it like you ‘leave your body’ returning back to the source.”

Liliana said she felt like her energy and essence were separated from her “earthly body,” and it felt familiar. She said she felt like she was returning there, and she said she now believes that’s where “we all come from.” She wrote that the whole time she was “mentally trying to talk,” but she couldn’t.

In another video, she said it was a traumatic event but that she makes jokes as a way of dealing with the experience. She also said that she is pretty sure she is allergic to weed.

A Twitter commenter wrote that “the kids are 100% fucking not ok.” Another wrote, “Keen to know how you ended up on ‘holy fuck you’re about to die’ TikTok.”