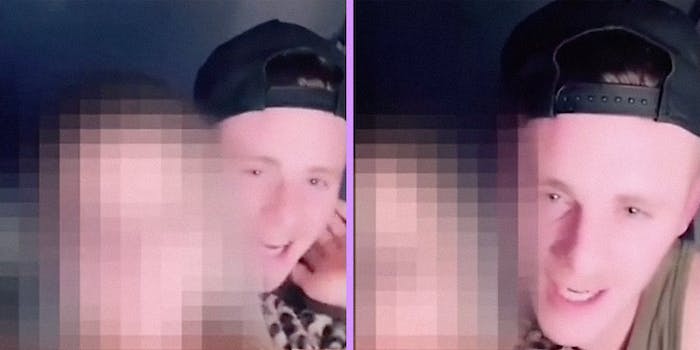 TikTok said it 'has no higher priority than keeping our community safe.'

TikTok banned an English dad after he filmed himself making racist comments and mocking Black people in a live stream Monday. A video shows him saying “Black people make me sick,” the Daily Mirror reports.

Cameron Timlin, a father from Leicester, England, had 3,800 followers before TikTok removed his page from the platform, per the Mirror.

The video, which was removed from TikTok but posted by the Mirror, shows Timlin with his then-girlfriend who remains unidentified. She swats Timlin after he says, “I don’t like Black people.” “You’re really pushing your luck,” the woman says. “Be nice.”

The two continue to stream and read comments. The woman laughs at a comment that says, “You don’t like Black people but you act like one,” per the Mirror. “You know what? Yeah, Black people do make me sick,” Timlin says. “And what? What are you going to fucking say? Nothing.”

“What gives the right of Black people fucking coming over to our country,” Timlin continues, per the Mirror. “So shut the fuck up before I dropkick you, you little silly bitch.”

At one point Timlin also repeatedly said “EDL,” referencing the far-right English Deference League, which Vice reports has many “old-fashioned racist members.” Timlin made a finger and thumb gesture that is commonly used in white supremacist spheres, according to the Mirror.

Timlin, who did not immediately respond to the Daily Dot’s request for comment, told the Mirror that he is “not interested” in commenting on the situation.

A live stream viewer, who was eventually blocked from viewing the stream after calling out Timlin, told the Mirror that “it went on for five minutes of [Tomlin] saying racist things and her giggling in the background.”

The viewer said she “doesn’t stand for racism” and decided to join so she could “say something,” per the Mirror. “I reported the video while I was in the live, as ‘hate speech’,” she said. “And a TikTok message popped up and said the reported content does not violate community guidelines.”

TikTok said in an emailed statement to the Daily Dot that “TikTok has no higher priority than keeping our community safe” and that Timlin has been banned from the platform.

The woman in the video’s sister said that her sister “doesn’t agree with Tomlin’s behavior and she has “come off all social media to protect her children,” the Mirror reports.

TikTok prohibits “any material that is racist or discriminatory, including discrimination on the basis of someone’s race, religion, age, gender, disability or sexuality,” according to the platform’s terms of service.

Although TikTok takes measures to limit racism and xenophobia on its platform, the app’s algorithm promoted an anti-Semitic death camp meme in July 2020, BBC reports.

TikTok launched a program to support Black creators on its app in January but they continues to face criticism for not supporting Black TikTokers, according to NBC News.

Update 5:29pm CT, March 26: This article has been updated with TikTok’s statement to the Daily Dot.