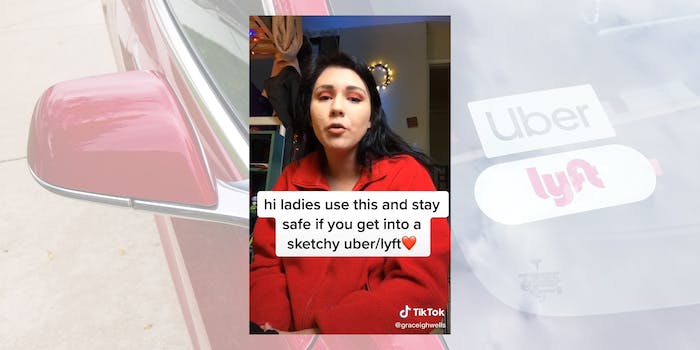 While TikTok is often a confusing blur of terrible ideas and potentially fatal challenges, sometimes there are trends that actually contribute positively to society. A new TikTok trend involves people recording fake conversations to use in rideshares like Uber and Lyft if people feel unsafe or are being harassed.

As pointed out by writer Haaniyah Angus, people on TikTok have been recording fake voicemails and phone conversations to play in case others feel unsafe in Ubers or Lyfts. Some are interactive scripts with pauses for actual conversation. Others are voicemails with more detailed info about knowing the person’s location.

As someone in this thread asked, why not just actually call someone? That often depends on the other person picking up and being on the same wavelength as you—if you have someone to call. Some of these can also be repurposed for walks home at night or for public transit.

Of course, during this current pandemic, taking Ubers and Lyfts should probably only be done in extreme situations to protect drivers and passengers. But America’s broken healthcare system has made it so taking an Uber or Lyft to the emergency room is often cheaper than an ambulance.

This isn’t the first instance of a sort of virtual solidarity on TikTok: A thread last year showcased voicemails from toxic or abusive exes as a warning to other women.